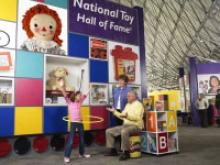 The National Toy Hall of Fame recognizes toys and games that inspire creative play over multiple generations. Toys can be nominated by anyone for the Hall of Fame, and they are then selected by historians and educators according to four criteria:

This last factor, innovation, can outweigh all the other criteria if the toy has made an industry changing contribution. An example of this is the Atari 2600 Game System, which was inducted in 2007.

Since 1998, the National Toy Hall of Fame has generally honored two or three toys each year, including such classics as the Hula Hoop, G.I. Joe, Candy Land, Tonka Trucks, Duncan Yo-Yo, View-Master, Radio Flyer Wagon, and the Slinky. They have also honored a general category of toys, such as the bicycle, playing cards, alphabet blocks, kites, cardboard boxes, the blanket, and the stick.5

The annual list of inductees into the National Toy Hall of Fame is:

Situated in its own gallery within The Strong, the National Toy Hall of Fame is an interactive gallery where guests can play and explore with the inducted toys. For example, they might race a Slinky down a staircase, dress up a giant Mr. Potato Head, play with Lincoln Logs, try out a Hula Hoop, or observe a Lionel Train display.6