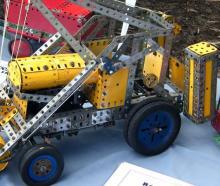 Who iS ALFRED CARLTON (A.C.) GILBERT?

Alfred Carlton (A.C.) Gilbert founded and led the A.C. Gilbert Company for over 50 years. What began with magic sets was soon anchored with his invention of Erector Sets and the enameled wire. Over the years, A.C. Gilbert Company also produced chemistry sets, radio kits, microscopes, telegraph sets, electricity sets, weather stations, Atomic Energy sets, and American Flyer trains.1 A.C.'s philosophy “never to work at anything that wasn't fun” created “educational” sets that made learning fun for a generation of children.2

A.C., who was born in Salem, Oregon in 1884, learned magic tricks from his father and later used those tricks to support himself as he studied medicine at Yale University.3 His magic performances led to the creation and marketing of boxed magic sets, which included detailed instructions. To produce these sets, A.C. founded the Mysto Manufacturing Company in 1909 with his friend John Petrie, a fellow undergraduate.

As a youth, A.C. had excelled in wrestling, football, and pole vaulting. In the latter he had experimented with a more effective “take-off” hole and a bamboo pole. While at Yale, and with these innovations, A.C. set a pole vaulting world record of 12'-7” in 1908 and earned himself a spot on the U.S. Track and Field Team for the London Olympic Games that year.

At the games he used his innovations and won the gold, but the officials ruled his equipment was illegal. He was allowed to vault again with traditional equipment and he won again. The Olympic Committee ruled that he would share the gold medal with an American teammate even though he had the higher vault.4 A.C.'s pole vaulting innovations were soon copied and became standards in the sport.

Based on his love and talent for sports, A.C. had been earning a medical degree in preparation for becoming a university athletic director. After the disappointment of the Olympic Games, he finished his medical degree in 1909, but chose to focus on his growing company instead of pursuing his former plans. The Mysto Manufacturing Company, based in New Haven, Connecticut, was producing equipment for professional magicians and tricks kits for the interested public.5

Two years later as A.C. was commuting on the New Haven Railroad, he observed the construction being done in order to switch the railroads from steam power to electrical power. In particular he was fascinated by the architecture of the erecting towers and steel girders used to install the power lines. Inspired, A.C. and his wife Mary worked with cardboard “girders” until they created a realistic girder pattern that could be bolted and screwed together to form a square support beam for building larger structures.

At that time the British toy company, Meccano Company, was already selling a similar building set, but its steel girder parts were 1/2” wide flat strips.6 A.C.'s steel beams, instead of being flat, were bent in a 90-degree angle lengthwise. This allowed four beams to be screwed together to form “a very sturdy, square, hollow support beam.” The resulting children's construction kit, the Erector Set, was “an assemblage of metal beams with evenly spaced holes for bolts to pass through, screws, bolts, pulleys, gears and eventually even engines.”7

Originally marketed as the Mysto Erector Structural Steel Builder,8 it was introduced in 1913 at the New York City Toy Fair.9 Through one of the first American toy advertising campaigns, the Erector set spread throughout America and expanded to a variety of sets known as No. 1, No. 3, No. 4, No. 77, and No. 7½. Two decades later, the “craze” was still strong, supported by company-sponsored building contests and the Gilbert Thrills magazine of engineering feats.10 The popularity of the Erector Set through the years resulted in it being inducted into the National Toy Hall of Fame in 1998.11

In 1913, A.C. and John parted ways, but it would be three more years before the company was renamed the A.C. Gilbert Company.12 A.C. also organized the Toy Manufacturers of the U.S.A. and served as their first president.13

Searching for a small motor to add to the Erector Sets in 1916, A.C. created a small, fractional horsepower electric motor through the invention of enameled wire. This was a feat that no other engineers at the time had been able to achieve.14 With this new electric motor, A.C. designed the Polar Cub fan, which could be manufactured in the toy industry's slow winter season and be sold during the summer months.15 By diversifying, A.C. Gilbert Company was able to keep workers employed year round.

Just as A.C.'s innovations with pole vaulting were not accepted immediately, his enameled wired motors were not UL approved at first. Only after the public bought the fans and other companies began using his technology did the UL approve his electrical breakthrough.16

THE MAN WHO SAVED CHRISTMAS

The following year, in 1917, with the manufacturing of Erector Sets, Polar Cub Fans, Mysto Magic Sets, and the new Chemistry Sets it had developed, A.C. Gilbert Company opened one of the world's largest toy factories at Erector Square in New Haven, Connecticut.

That was also the year that A.C. convinced the U.S. Council of National Defense to not ban Christmas toys. The council wanted to encourage families to buy World War I war bonds instead. Representing The Toy Manufacturers of the U.S.A., A.C. passed out some of his company's toys to the council with the conviction that “toys were too important to give up, both for educating children and for overall morale.” The council played with the toys for three hours before deciding not to ban Christmas toys. A.C. was praised by the press as “The Man Who Saved Christmas.”17

By 1920, A.C. Gilbert Company was marketing a radio kit, and the company was issued a radio broadcasting license for WCJ in New Haven, Connecticut. As the 6th American radio station, Gilbert Radio Press was the first with a radio sports program.18 They interviewed famous athletes and A.C. personally hosted a sports review program.

A.C. Gilbert Company expanded their appliance line in the 1920s with the Dari-Rich Blender. The company purchased the patent for a portable mixer from Oscar Erhardt and marketed it for reconstituting powdered milk. At that time most households did not have refrigeration and powdered milk was the most common source of milk. The Heath processed powdered milk, however, was not easily mixed, which made the Gilbert reconstituting mixer popular. Later, this blender came to be used as a milkshake maker.

Although A.C. Gilbert Company mainly concentrated on making toys for boys, for a short time in the 1920s, they manufactured a line of girls toys, the LaVelle Toy Company, and owned the children's record label, Bob-O-Link.19

Some of the educational toys and kits that A.C. Gilbert Company manufactured and marketed included microscopes, toolsets, engineering sets, metal casting sets, electricity sets, and a glass blowing kit. In the spirit of realism, they also produced an Atomic Energy set in 1951, complete with radioactive material samples and a working Geiger counter. After protests from parents, they stopped production of the Atomic Energy kits in 1952.20 All of A.C. Gilbert Company's kits were accompanied with a well-written manual or book.

In 1938, A.C. Gilbert Company acquired American Flyer Trains and completely redesigned the line by creating scaled, realistic die-cast cars that were modeled after actual railroad blueprints. Eventually, there were seven basic steam-type engines, a basic diesel, and a basic diesel switcher.21 Later, in 1946, they introduced the S gauge 2 rail track trains, which allowed full-length realistic cars that could go around the sharp track corners. Other innovations included the train’s sound system, the talking station, and the smoking smokestack.22 Lionel was the lead manufacturer of model trains in America at the time, with A.C. Gilbert Company running a distant second place by capturing about one-third of the market.23

During World War II, the A.C. Gilbert Company switched totally to military production and made flares, range indicators for anti-aircraft guns, mines, and electric motors for the trim tabs of fighter planes. They received an Army-Navy “E” award in 1943 for their contributions. Another indirect way that the company assisted the war effort was through their Erector Sets, which were used by architects and engineers to design and test a portable bridge design.25

After World War II, American life sped up with the beginning of the space race and the onset of television. A.C. retired in 1954 and his son, A.C. Jr. (Al) ran the company through these changing years.26 A.C. died in 1961 and the company was sold to the Wrather Corporation in 1962. Jack Wrather, an acquaintance of Al's, appointed a CEO and retained Al as the Chairman of the Board until Al died in 1964 from a brain tumor.27

Jack saw the company not as an educational one, but as a leisure company, much like his own lifestyle. After several failed attempts to market their existing toys and to create new lines of toys, the A.C. Gilbert Company ceased production in 1966 and declared bankruptcy in 1967.28 In liquidating the company, the Erector Sets were sold to Gabriel Industries and are being manufactured by Meccano, their former competitor. Similarly, the American Flyer line of trains was sold to Lionel.