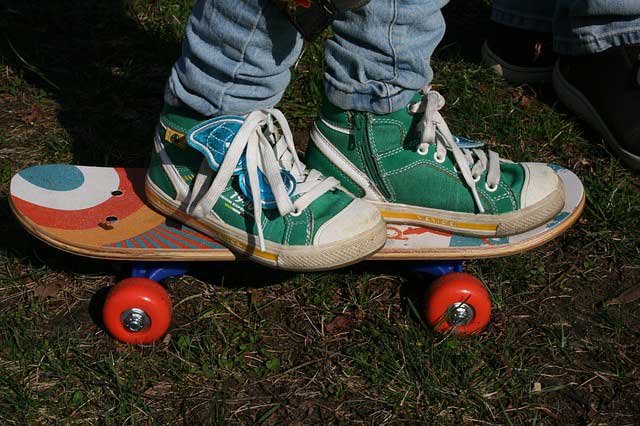 A skateboard is made of three components: a deck, trucks, and wheels. The decks are made of wood veneers that are laminated and glued together and then molded with a nose, tail, and concave shape. Since the slick finish makes it difficult for the rider to stay on while skateboarding, sandpaper-like grip tape is often added to the top of the board. Trucks are the T-shaped axles attached to the front and rear of the board that allow the wheels to spin and give riders the ability to turn. Typically, the wheels are made of polyurethane in a variety of sizes and hardness.1

Skateboarding resembles surfing with its side stance position on the board. Usually riders place their left foot forward on the board while using the right foot to push off. For safety purposes riders often use knee pads, elbow pads, and helmets to give them some protection in a fall.3 Requiring a high level of balance and coordination, skateboarding works muscles throughout the body. Core muscles are particularly used to help stabilize the body and allow for balancing on unstable surfaces.4

The concept of riding a board with wheels had its beginnings in the early twentieth century. Bicycling was very popular, but bicycles were expensive. Roller skates were a popular alternative that were much more economical. Inventive children were known to disassemble a roller skate and attach it to a piece of wood with a wooden fruit crate added as a handlebar. These first scooters were sometimes ridden without their makeshift handlebars and were in essence the first skateboards.5

There were some early skateboard-type products sold without much success. In the 1920s a three-wheeled, stamped metal device with pedal car wheels and an adjustable heel cup and toe clip were sold in pairs along with a set of poles designed to mimic cross-country skiing. It had a 3” by 10” riding surface, but had no steering mechanism. A single three-wheeled product called the Scooter Skate was produced in the 1930s, which could be ridden with or without handlebars and had roller-skate style wheels, however, it did not have a steering mechanism either. Around 1945 a four-wheeled device made from aluminum called the Skeeter Skate was created that introduced the first steering axles called trucks, which allowed riders to turn for the first time.6

The popularity of skateboarding is tied to the surfing craze in California of the late 1950s. While waiting for good waves to come in, surfers began to build skateboards to practice their surfing techniques on land. Their early skateboard creations were difficult to maneuver and stay on, but in 1959 the first commercial skateboard was manufactured by the Roller Derby Company that made modifications to the trucks to make riding easier. In the early 1960s more companies began to mass produce skateboards and within a three-year period over fifty million skateboards were sold. However, by 1965 many safety experts had deemed skateboarding unsafe and urged parents to stop buying them for their children. This resulted in a slump in sales, but as manufacturers worked on improving the wheels, trucks, and look of the boards over the years, skateboarding’s popularity rose again. Beside “sidewalk surfing” as the only means of enjoying skateboards, children began experimenting with plywood ramps and empty swimming pools. Concrete skateparks were built in the 1970s, and vertical skating along with slalom, downhill, freestyle, and long jump styles were developed.7

Vertical skating, also called vert skating, is the popular ramp skating that includes performing technical tricks in the air. Downhill skateboarding is similar to downhill skiing with the objective to finish a run at the highest speed with the lowest time. Long boarding is most similar to surfing with sharp curves and slalom maneuvers made while speeding down an incline. On a flat surface, freestyling consists of executing tricks around making the board spin, roll, and flip in various ways. Similar to parkour, street skating involves using the urban landscape with its benches, hand rails, retaining walls, and stairs.8 Skateboarding competitions have elevated the fad to a serious sport with professionals making millions of dollars.9

Skateboarding remains popular, and its inclusion in the 2020 Summer Olympics has not only legitimized the sport, but has also demonstrated its international appeal. 31 May, 2019." href="#footnote10_0158jf1">10