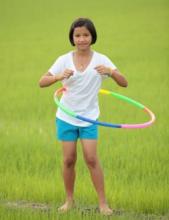 The hoop has been a popular children’s toy for thousands of years, and the introduction of the Hula Hoop in 1958 by the Wham-O toy company has been documented by sociologists as one of the biggest fads ever to take hold in America and one of the most significant events of the time.1 Because of its enduring popularity, the Hula Hoop was inducted into the National Toy Hall of Fame in 1999.2

There is evidence that children played with hoops as far back as 1,000 B.C. in Egypt. Early hoops were made from dried grapevines and they were often propelled using sticks to roll them on the ground as well as twirling around children’s waists. Ancient Greece and Rome had hoop rolling with hoops often made from metal. Similar hoop games were enjoyed in other early cultures throughout Asia, Africa, and the Americas with many Native American tribes using hoops in their dances and as a form of rolling target practice.3 Wooden hoops were enjoyed by children in Western Europe and England in the 1800s with varying designs, and rolling a hoop along the ground with a stick called a skimmer or with the hand was called hoop rolling or bowling a hoop.4

The word “hula” was introduced to British explorers in the 1700s who witnessed the Polynesian hula dance. Even though the hula dance didn’t involve hoops, the movement of the dancers’ bodies resembled children twirling hoops around their waists and the name hula hoop became popular.5

Wham-O founders, Richard Knerr and Arthur “Spud” Melin, heard about children in Australia twirling bamboo hoops around their waists for exercise and decided to re-invent the hula hoop. Since the hoop had been in existence for years, Wham-O couldn’t patent the hoop, but it did patent the name Hula Hoop.6 They marketed their plastic Hula Hoop by taking them to children’s playgrounds in southern California where they demonstrated how to use them and then gave them away. Within four months they had sold over 25 million Hula Hoops in the United States for $1.98 each, and worldwide they had sold over 100 million in 1958 alone. At the height of their popularity, Wham-O was producing 20,000 hoops per day.7

Local Hula Hoop contests sprang up in cities and towns across America. A National Hula Hoop Contest ran from 1968 through 1981, and in 1980, the World Hula Hoop Championship was held in more than 2,000 cities with an estimated two million participants.8 The craze has continued with a World Hoop Day that was first celebrated on July 7, 2007 and continues each year. World Hoop Day is a charity event for children in developing countries.9

Children’s Hula Hoops are made of high-density polyethylene (HDPE) plastic in various sizes, colors, and designs and are held together by staples. They often have ball bearings, beads, bells, or other noisemakers inserted inside the hollow tube to add interest.10 They are usually between 28 and 36 inches in diameter and weigh about 8 ounces.11

Hula Hoops are spun around the body from the momentum of rocking back and forth or from side to side. To have the hoop start spinning, it is held horizontally touching the small of the back and then as the body is turned in one direction, the hoop is spun in the other. The shifting of the weight and the rocking motion helps keep the Hula Hoop spinning. The hips should not be moved in a circular motion, which will slow down the hoop.12

Children enjoy several games and tricks with Hula Hoops besides just spinning the hoops around their waists. The hoop can be rolled with the hand or a stick, used as a jump rope, spun backward in a vertical position to return when thrown, and used as a rolling target for thrown or kicked balls.13

Spinning a Hula Hoop is very good exercise as well as a fun activity. It gives a low-impact, high-energy workout that improves core strength and works more than 30 core muscles, tones the body, and burns calories at approximately 400-600 calories in an hour. It also improves balance, coordination, and flexibility.14 The hula

hoop is a great physical activity for kids during recess on the playground.