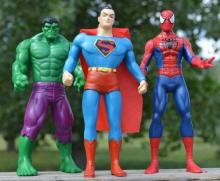 Called action figures rather than dolls, these doll-like toys are targeted for boys. They are made of plastic, are usually articulated with moveable joints, and are able to stand on their own. The action figures are traditionally created from comic book characters, movie characters, and real-life heroes whose stories can be acted out as children play with them. With the struggle between good and evil, the action figures generally have specific roles, friends, enemies, missions, weapons, equipment, and vehicles to enhance their stories.1

G.I. Joe is considered to be the first action figure to enter the toy market. The Barbie doll was introduced in 1959 by Mattel and was a runaway success. Stan Weston, a merchandiser and friend of the Mattel owners, Elliot and Ruth Handler, was influenced by them as he sought for properties to represent. His strong interest in the military-led Stan to imagine military figures that could be promoted as toys for boys. Meeting Don Levine, Vice President of Product Development for Hasbro, at the annual Toy Fair of 1963 led to subsequent meetings pitching the idea to Hasbro. Hasbro paid Stan $100,000 for his idea, and the G.I. Joe line of action figures was launched in1964.2

Within the first two years of production, G.I. Joe sales produced nearly 66 percent of Hasbro’s profits. The patented designs carefully promoted safety, durability, and cost-effective manufacturing, and the moveable joints with 19 points of articulation and the high quality of the product were key to the early success. The first figures introduced under the G.I. Joe brand represented the four branches of the armed forces: Rocky the Moveable Fighting Man (Army), Skip (Navy), Ace Fighter Pilot (Air Force), and Rocky (Marine). Each nearly 12 inch figure included basic fatigues, boots, cap, and a dog tag, with the packaging showing additional uniforms and accessories that could be purchased.3

In 1966 Mattel joined the boy’s action figure market with Major Matt Mason, tapping into America’s fascination with the space race. This toy line featured astronauts and playsets that were based on actual NASA prototypes. Rather than being manufactured as plastic figures, these toys were made with a wire inner frame over a rubber-suited body. As interest waned in the early 1970s with real-life space adventures, so did interest in the Matt Mason toys.

Also in 1966, the Captain Action toy line was introduced by the Ideal Toy Corporation. Captain Action was 12 inches tall and came with a costume, hat, sword, and gun. With costume changes, he could become a superhero including Spiderman, Batman, Superman, and others. A sidekick, Action Boy, was quickly added, and they fought their enemy, Dr. Evil. With the success of the Captain Action toy line, Ideal released a companion line aimed at girls called Super Queens, with four heroines: Batgirl, Mera, Supergirl, and Wonder Woman. Even though Ideal experienced great success with the line, interest died down and the toy line was discontinued in less than three years.4

The social climate of the times with the Vietnam War reflected in the decline in sales of Hasbro’s G.I. Joe line in the late ’60s.5 The company responded by relaunching the toys in 1970 as a team of adventurers rather than military men. The new figures for the Adventures of G.I. Joe received lifelike hair and beards, moveable eyes, and hands that had a “kung-fu” grip that enabled them to hold objects.6

In 1972 Mego secured the rights to the superheroes and characters found in the Marvel Comics and DC Comics. They introduced 8 inch action figures under the name, The World’s Greatest Superheroes, and their four original characters were Superman, Batman, Robin, and Aquaman. They were a huge success and the line expanded to include Spiderman, Captain America, and Tarzan the following year.7 The line grew to more than 30 characters, including the1974 additions of the Supergals Assortment of Supergirl, Batgirl, Wonder Woman, and Catwoman, and the Superfoes Assortment featuring Riddler, Mr. Myx, Joker, and Penguin.8

In 1973 Mego became the first company to release action figures based on a movie series with its Planet of the Apes figures.9 Then in 1974 Mego secured the license for the Star Trek property. The original five figures released were Captain Kirk, Mr. Spock, Dr. McCoy, Mr. Scott, and the Klingon. The Star Trek figures were a huge success, and the popularity of the movie series continued the success of the toys based on it. Mego included Alien figures as well as the U.S.S. Enterprise Playset in 1975.10

While Mego was experiencing great success with the Star Trek toy line, the company passed on the opportunity to pick up the Star Wars toy license. Kenner bought the rights on the unproven project, and when the first Star Wars movie was released in 1977, it was a huge hit. Realizing the difficulty of scaling playsets and vehicles to their customary 8 inch format, Kenner chose to make their action figures 3.75 inches in size. Their original action figures released were Chewbacca, Princess Leia, Luke Skywalker, and R2-D2. As more Star Wars movies were released, the toy line expanded and experienced a huge success with its many characters, vehicles, and playsets.11

During this time the price of oil had skyrocketed making the increased expense for making plastic too high to pass on to the consumer to continue making action figures as large as they had been made. The smaller action figures of the popular Star Wars line led the way for other toy companies to adopt the new size. Hasbro adopted the smaller size with their new line of G.I. Joe: A Real American Hero launched in 1982.

Without a movie to tie into the new launch of G.I. Joe like Kenner had with Star Wars, Hasbro teamed up with Marvel Comics to produce a series of comic books they advertised on television. The comic book storyline produced a seven-member paramilitary strike team that combated a terrorist organization called COBRA. The initial line of G.I. Joe: A Real American Hero action figures was launched in 1982 with nine figures: Breaker, Flash, Grunt, Rock ’n Roll, Scarlett, Short-Fuze, Snake Eyes, Stalker, and Zap. Seven vehicles made up the original toy line and included an additional four figures: Clutch, Grand Slam, Hawk, and Steeler. Two COBRA figures were also released.

The Marvel comic book series was a huge success. To capitalize on the increased interest in G.I. Joe, Marvel Productions and Sunbow Productions co-produced the G.I. Joe cartoon series first airing in 1983 and G.I. Joe: The Movie as a video for purchase in 1987.12 With the success of cartoons promoting products, Mattel launched the He-Man and The Masters of the Universe toy line in 1982 creating their own cartoon series. Their toy line was successful for six years.

In 1984 Kenner acquired the rights from DC Comics to produce 5 inch action figures in the Super Powers toy line. As an added gimmick, they gave each figure an “action feature” to represent their individual super power including Superman with a “Power Action Punch,” Hawkman with “Power Action Flight Wings,” and Aquaman with a “Power Action Deep Sea Kick.” The Super Powers also had a comic book series and cartoon series to promote the toy line, but the line was only successful for three years.

A new innovation to the action figure industry came in 1984 when Hasbro introduced the Transformers toy line. These action figures were robots that could be transformed into guns, cars, and other vehicles. Marvel Comics developed a story line to encourage the sale of the Transformers and produced a comic book series. Sunbow Productions created the cartoon series, a feature-length animated movie was released in 1986, and the Transformer franchise continued to be promoted with their own video games as well.

Teenage Mutant Ninja Turtles released by Playmates Toys in 1987 had a long successful run in the action figure world. Originating from a comic book published in 1984, the resulting cartoon series made these action figures a huge hit.

Toy Biz acquired the master license to create action figures from the Marvel Comics from 1990 to 2006, and they produced a large number of successful action figures, most notably The X-Men and Marvel Legends lines.13

Beyond the superheroes of earlier action figures, musicians, athletes, and other prominent people as well as television and movie characters have been made into action figures.14 Action figures offer children the opportunity to engage in dramatic play and express themselves in various role play scenarios. The popularity with children over the years has been the sense of strength and empowerment they feel as they imagine themselves playing with their heroes.15