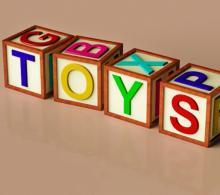 Playing with blocks has been children’s work for centuries and has allowed children to learn about spatial relationships and physical properties of objects as well as concepts in math, science, and language through their play.1 Alphabet blocks are thought to be one of the first educational toys designed specifically for children, and they were seen as essential tools for learning for young children as early as in the 17th century. The idea of using alphabet blocks with children was to encourage learning to read and spell in an enjoyable way.2

English philosopher John Locke proposed in 1683 that learning and play should go together and described the merits of alphabet blocks for young children. Friedrich Froebel developed the use of blocks in his kindergarten movement of the early 1800s, which soon led to the further development of alphabet blocks.3 European and U.S. manufacturers began to produce wooden building toys in the mid-1800s as a sideline to their woodworking and printing businesses. S.L. Hill was one of the first American manufacturers of alphabet blocks, who patented them in 1858.4

Typically, a set of alphabet blocks contains 26 blocks, each containing a letter of the alphabet. They can have one letter per block or contain multiple letters on the different sides. Originally they were made of wood and carved with the letters brightly painted.5 As manufacturing of wood products developed, early alphabet blocks were produced as paper-on-wood, and later an embossing process was used creating multi-colored printing directly on the wooden blocks.6

Often symbolic pictures were added to the alphabet blocks to reinforce the association of the letters with words, and these pictures would often follow a theme, such as zoo animals. In the 1800s biblical themes, such as Noah’s Ark, were popular designs on alphabet blocks, reinforcing familiar stories with the letters. The prevailing thought was that children would learn to understand symbol systems and their ABCs, which would lead to reading simple words and follow a narrative order. Learning the letters of the alphabet when tied to storytelling was presumed to produce literacy.7

Alphabet blocks became so popular that they were inducted into the National Toy Hall of Fame in 2003.8 The Strong’s National Museum of Play in Rochester, New York, has a collection of more than 150 block sets that extend from early embossed wooden sets through current molded plastic blocks.9