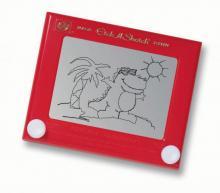 Manufactured by the Ohio Art Company, the Etch A Sketch is a mechanical drawing toy that has been a popular classic toy for over 50 years.  First marketed in 1960, this remarkably simple device still maintains the original basic concept with little change to the design. The Etch A Sketch was inducted into the National Toy Hall of Fame in 1998 for its enduring popularity. In 2003, the Toy Industry Association named the Etch A Sketch to its Century of Toys List commemorating the 100 most memorable and creative toys of the 20th century.1

The Etch A Sketch is composed of a thick glass gray screen in a red plastic frame. There are two white knobs on the bottom corners of the toy that give the Etch A Sketch the look of an old television set. The inside surface of the glass screen is coated with aluminum powder that is mixed with tiny beads that aid the coating process. When the knobs are turned, a stylus attached to two rails, one that moves horizontally and the other vertically, scrapes off the aluminum powder creating a black line. The line appears black simply because there is no light inside the Etch A Sketch.2

A curved line can be accomplished by moving both knobs at the same time. Because the line generated remains unbroken, elaborate designs must be well planned out in advance. When the person drawing the design wants to start over, simply shaking the Etch A Sketch will remix the powder and cover the screen again, thus clearing the image. Some expert artists using the Etch A Sketch have created impressive designs that can be preserved by drilling small holes in the device and removing the excess powder and beads.3

The invention of the Etch A Sketch is traced to an electrician in France by the name of Andre Cassagnes, who in the mid-1950s began experimenting with various materials to create a children’s drawing toy. He called his invention the Telecran. In 1957, he won a top prize at the Paris Concurs International D’Inventions for his concept and drawing, and applied for the patent that same year. However, without sufficient funds to pay for the patent application, he acquired an investor, Paul Chaze, who had his accountant, Arthur Granjean, file for the patent. Arthur’s name was on the patent application, and he was mistakenly thought to be the inventor. The French patent rights were assigned to Paul Chaze, so he could market the product. Somehow in 1965, Paul convinced Andre to relinquish all rights to the Etch A Sketch, except for sales in France, for the amount of $10,000.

Henry Winzeler, the founder of The Ohio Arts Company, through relationships with key business partners, recognized the potential of the invention and had his Chief Engineer, Jerry Burger, work with Andre Cassagnes to perfect the Etch A Sketch system. The company purchased the rights for distribution of the Etch A Sketch in the United States from Paul Chaze for $25,000. The toy went into production in 1960 and a successful advertising campaign just before Christmas of 1960 made it an instant hit.4

With televised advertising and seals of approval from both Good Housekeeping and Parents magazines, the Etch A Sketch became a mainstay in the toy industry. Sears, Roebuck & Co. sold ten million Etch A Sketch toys during the 1960s alone.

The Ohio Art Company developed Etch A Sketch spin offs during the 1980s, including the Etch A Sketch Animator, which was an electronic version that played back sketches to simulate animation. These spin offs continued in the 1990s with the color Etch A Sketch models in 1993 and the jewel toned pocket models in 1995. The 1995 animated film, Toy Story, which included an Etch A Sketch, brought back renewed interest in the classic version of the toy.5

Another surge in interest came during the 2011 Presidential election when a top advisor to candidate Mitt Romney made a statement referring to Romney’s campaign and the ability to erase an Etch A Sketch. Eric Fehrnstrom’s comment was “I think you hit a reset button for the fall campaign. Everything changes. It’s almost like an Etch A Sketch. You can kind of shake it up and restart.” This prompted opposing candidates to display an Etch A Sketch and attack Romney’s politics.6