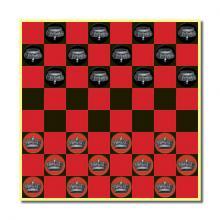 Checkers is a popular board game played by children and adults alike. The game is played on a checkerboard of two colors, usually black and red, with the most popular size in America being 64 squares on an 8x8 board. The board game is played around the world and is known as draughts (pronounced “drafts”) in Europe.

The origins of the game date back thousands of years. Large inscriptions found in the ancient temple of Thebes portraying Egyptian King RaMeses playing a game of draughts date back to 4000 B.C.1 Another archeological dig in present day Iraq discovered a similar board game in what was the ancient city of Ur in southern Mesopotamia dating 3000 B.C.2 As the game moved into Europe it was mentioned as early as the 8th century B.C. in Homer’s Odyssey. During the Middle Ages as the game developed in Europe, the game pieces were described as being kept in a gaming box, which consisted of two boards with raised borders hinged together to form a box when closed and a game board when opened.3

The game of checkers is typically played on a board made up of red and black squares with eight columns and eight rows. The game is played by two players on either side of the board, each having twelve disk-like pieces that are usually red and black. Only the black squares are used for play. Each player places his twelve checkers in the three rows closest to him, making sure that the lower right corner of the board is a red square.4

The object of the game is to eliminate all the opponent’s pieces or to create a situation where the opponent cannot make a move by trapping his pieces. The player with the black checkers moves first. Initially checkers may only move forward diagonally to an adjacent black space. A capturing move can be made if a player can jump an opposing piece when the square behind the piece on the same diagonal is open. If a player has the opportunity to jump more than one piece, he may do so. Each piece jumped is considered captured and removed from play. The player cannot jump his own pieces. In the American version of checkers, when a player is in position to make a capturing move, it must be made. If there is more than one capture move available, the player can choose which to make.5

When a checker reaches the opponent’s edge of the board called the “king’s row,” it is crowned with another checker placed on top of it and is now referred to as a king. As a king the piece can now be moved both forward and backward and may jump opponent’s checkers in either direction. When a player’s uncrowned checker first reaches king’s row, his turn is ended even if another capture seems possible. He must wait for his next move.6

Board games, such as checkers and chess, have been acclaimed by educators as having a connection with higher reading and other academic scores for children who play the games.7 Children receive many mental and social advantages from playing checkers and become better learners. The game provides opportunities to develop skills in problem solving, concentration, memory recall, and sound judgment. The difficult skills for children of patience and self-regulation are required for children playing checkers. Children also develop skills in strategy as they understand the concepts of attack and defense.8

A shorter, faster game for children is called Fox and Hounds. Played on a checkerboard, one player is the fox and has only one piece, which can move backwards or forwards like a king. The other player has four checkers who are the hounds. The hounds can only move one space forward. There is no jumping or capturing. The hounds start on the four black squares on the back row. The fox starts on any black square on his back row. The object of the game is for the fox to make it to the king’s row without getting trapped by the hounds.9