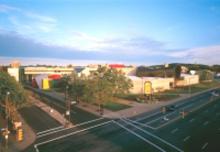 After a lifetime of collecting dolls and toys, in 1968 Margaret Woodbury Strong created the Margaret Woodbury Strong Museum of Fascination in her home in Rochester, New York. For more than a decade Margaret had been conducting official and unofficial tours of her collections, so she named the official museum after the way her guests would often describe her collections.1 She hoped her museum would “fascinate, educate, and entertain.”2

Though she planned to personally expand her estate to display her collection of dolls and toys, her death the following year left those plans undone. However, in 1982, thirteen years later, due to the large financial resources from Margaret's will, the Margaret Woodbury Strong Museum opened in downtown Rochester on 13.5 acres of land.

Since nearly all the dolls and toys of Margaret's collection were mass-produced, the initial focus of the museum was concerning industrialization and how it affected everyday life. During the 1980s the focus evolved into an examination of the “consequences of progress, the rise of the middle class, and the expressions of identity.”3

Shifting their focus to attract families, in 1997, the original 156,000 square foot museum received a new glass atrium entrance in order to house an operating 1918 carousel and a 1950s diner. The displays were also increasingly becoming interactive and child oriented as well.

A physical expansion of the Margaret Woodbury Strong Museum was finished in 2006. By adding 126,000 square feet, it became one of America's largest history museums and the second largest children's museum.4 This expansion added amenities, such as museum shops and a food court, but also greatly increased the museum's capacity for interactive displays. And, with a collection now numbering in the hundreds of thousand play items, a new collection storage facility was also added.

With this expansion came a refinement of their mission and a new name: the Strong National Museum of Play. Dedicated to exploring “play and the ways in which it encourages learning, creativity, and discovery and illuminates cultural history,” the museum seeks to communicate the “critical role of play in human physical, social, and intellectual development.”5

As a growing leader in the field of play, in 2008, the museum began publishing the quarterly American Journal of Play, a peer-reviewed, interdisciplinary forum for discussing the culture, science, and history of play.

The following year, in 2009, the museum named their 130,000 volume library and archive the Brian Sutton-Smith Library and Archives of Play. Besides housing the personal library and papers of the play scholar Brian Sutton-Smith, it also holds a wide range of primary and secondary resources, such as trade catalogs, game design materials, manuscripts, children's books, and scholarly works.6

Also in 2009, the Museum created the International Center for the History of Electronic Games, which collects, studies, and interprets electronic games, including how they have changed how people “play, learn, and connect with each other.”7

Renamed The Strong in 2010, the museum organized their areas of play exploration into five Play Partners: the National Museum of Play, which started out as Margaret's collection of dolls and toys; the National Toy Hall of Fame; the International Center for the History of Electronic Games; the Brian Sutton-Smith Library & Archives of Play; and the American Journal of Play.

As an independent, nonprofit organization, The Strong partners with community organizations to reach special interest groups, such as urban children, foster families, children with disabilities, and pediatric physicians.8 They are funded by the Margaret Woodbury Strong Trust, the Institute of Museum and Library Services, the New York State Council on the Arts, and private contributions from individuals, corporations, and foundations.9