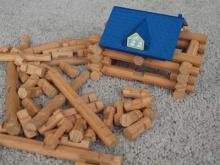 The popularity of children’s construction toys grew from simple wooden blocks to the development of Lincoln Logs in the early 1900s. Lincoln Logs are considered a classic American toy and were honored by being inducted into the National Toy Hall of Fame in 1999 for their enduring popularity.1 They are still produced today using the original design of small, interlocking notched wooden logs made of varying lengths that allow children to build structures with doors, windows, and roofs.2

The inventor of Lincoln Logs was John Lloyd Wright, whose father was the famous architect, Frank Lloyd Wright. John’s parents were influenced by Friedrich Froebel’s kindergarten methods, and they provided their children with a large playroom full of building blocks of all shapes and sizes to stimulate their children’s creativity. As John became interested in toy construction as an adult, his early education and play with blocks led to his development of toys that emphasized “rhythmic pattern, prefabrication, and construction from interchangeable elements.”3

John followed his father into architecture and eventually worked with him on building projects. His concept for his interlocking Lincoln Logs came from observing his father’s construction techniques on the Imperial Hotel in Tokyo, Japan around 1917. The building used a unique foundation of interlocking beams intended to make the structure earthquake proof. John made his Lincoln Logs out of redwood and first marketed them in 1918 through his company, Red Square Toy Company, which he later renamed the John Lloyd Wright Toy Company.4

The Lincoln Logs were an immediate success, and since the toys were made of wood, production remained strong through the 1940s during World War II when there were restrictions on use of metal that affected other toy manufacturers. In the early days of television, Lincoln Logs were one of the first toys advertised. In 1953, they were targeted to families who could afford educational toys on a show called Pioneer Playhouse.5

John chose to name his new toy after Abraham Lincoln with the image of pioneer life and Lincoln’s fabled life in a cabin. There was a concern in the early 1900s as there is again in the early 2000s that the urbanization of America was minimizing children’s connection with nature and traditional American values.6 John advertised his toy with the slogan, “Interesting playthings typifying the spirit of America.”7 Lincoln Logs specifically encourage imaginative play with pioneer themes and have maintained their appeal through their nearly 100 years of existence.

Building with Lincoln Logs fosters development of fine motor skills and eye-hand coordination. Creativity, problem solving, and social skills are also developed as children work together to follow the accompanying instructions in the sets or launch out to build their own creations with the logs.8

Lincoln Logs continue to be developed and distributed by K’NEX and licensed by Hasbro. After a time of using plastics to make the Lincoln Logs pieces during the 1970s through the 1990s, the sets are once again made of real wood. The logs are precision cut, given a smooth, splinter-free finish, and then treated with a top-grade stain to preserve and extend the life of the wood. The nostalgia of the wood appeals to the many generations that have enjoyed playing with Lincoln Logs through the years.9