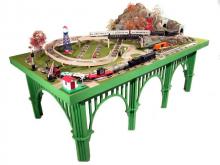 Lionel Limited Liability Corporation, known as Lionel L.L.C., is a manufacturer and marketer of toy and model trains, including historically accurate locomotives, rail cars, and accessories. The company, which began in 1900, employs detailed and innovative engineering to introduce children of the 21st century to the hobby of Lionel trains. Their mission is to “keep the magic of the Lionel tradition living for another 100 years.”1

Joshua Lionel Cowen and a work colleague, Harry C. Grant, founded Lionel Manufacturing Company in 1900 in New York City. Joshua was the 24 year old American born son of European immigrants who had a fascination with the newly discovered electricity. Previously, he had studied at the Peter Cooper Institute High School where he invented the electric doorbell. Nothing came of this idea though, as an instructor advised him that “nothing would replace the knuckles for announcing ones arrival.”2

Starting in 1893 Joshua tried first the College of the City of New York and then Columbia University before leaving college plans to apprentice with Henner & Anderson, an early dry cell battery manufacturer. His first job was as an assembler at the Acme Lamp Company, where he met Harry. In the evenings he continued to experiment with electricity and in this way he developed a fuse for igniting magnesium powder, a flash used by photographers.3

The U.S. Navy heard about Joshua's fuse and hired him to install foolproof detonators for 24,000 mines for which he earned $12,000. With these earnings Joshua and Harry opened the Lionel Manufacturing Company and produced fuses, low-voltage motors, and electric innovations such as an electric fan. After seeing a Manhattan toy store window display with a push train and seeking a way to attract attention to their products, Joshua attached one of his small motors to a railroad car and ran it on a track in his window display in 1901.4 However, instead of selling motors, Joshua and Harry found they were now marketing trains.

The “Electric Express,” an open gondola car powered by a small motor, was their first product, and their first wholesale customer was the toy store which had the push train that inspired Joshua. The “Electric Express,” which was run on rails 2 7/8” apart, was designed as an attention getter for toy store displays rather than as a toy for families.5 By 1902 they were publishing a catalog for customers and families that featured a “City Hall Park” trolley, a two foot suspension bridge, and dry cell batteries as well as supplies to convert household electrical current to power the trains.6 The following year they introduced the replica of the Baltimore and Ohio locomotive which marked the beginning of manufacturing historically accurate train models.7

As the company grew, in 1904 Joshua hired Mario Caruso, an Italian immigrant, to handle the manufacturing so he could focus on marketing. By 1906 their catalog was offering two steam locomotives, three electric trolley cars, two passenger cars, and seven freight cars – all on the new three-rail “standard gauge” track that was 2” between rails. This gauge was widely used in the industry until a competitor, Ives Trains, began producing the “O” gauge in 1910. This gauge made for a smaller track and train systems since the three rails were 1” apart. Five years later Lionel offered both the standard gauge and the “O” gauge trains but eventually the “O” gauge would become an “exclusive hallmark” of Lionel.8

With expanding their product line, they also needed to expand their manufacturing space, which they accomplished by moving to New Haven, Connecticut. After five years of commuting, the factory was moved closer, first to Newark, New Jersey and then in the 1920s to Irvington, New Jersey. During this expansion time, the company introduced the “racing automobiles” line (1912) as well as the multi-volt transformer and rheostat for controlling engine speed. The trolleys were discontinued (1916) and influence of World War I was seen in the new O-gauge armored train equipped with a cannon (1917).9 They were also manufacturing compasses, binnacles, and signal and navigational equipment for the Navy.10

On July 22, 1918 the company was reorganized as the Lionel Corporation with Joshua as president. His son, Lawrence who had been born in 1907 and would later lead the company, became the “face” of the corporation on boxes and catalogs. During the 1920s they advertised in newspapers, boys' magazines, and The Saturday Evening Post with slogans such as “Lionel: The Father and Son Railroad” and “Real enough for a man to enjoy – simple enough for a boy to operate.”11 They also had celebrity endorsements and a Lionel radio show.

In conjunction with American Flyer Trains, Lionel bought Ives Manufacturing in 1928, which gave them the reversing unit which allowed trains to change direction. By the end of 1930, they bought out the American Flyer interests and moved the Ives manufacturing operation to Irvington. The abundance of the Roaring Twenties gave Lionel a market for elaborate reproductions of locomotives, train cars, bridges, power stations, and switch towers. Details on the trains included brass and nickel trim, running lights, operating pantographs, removable roofs, and moveable parts.

With the Depression, Lionel found their products were out of line with what people could afford in the new economy. They adjusted to the smaller O-gauge format and began copying the new streamlined trains in use at that time. Additionally they produced a Mickey and Minnie Mouse wind-up handcar that sold for $1. This toy caught the public's attention and led to a similar Santa Claus hand car, Donald Duck and Peter Rabbit “chick mobiles,” and a Mickey Mouse Circus Train.12 These smaller toys brought customers back to Lionel where they now found more affordable streamline trains than the previous elaborate reproductions. By 1935 the company was back onto solid footing financially.13

The late 1930s and early 1940s included many innovations: the steam whistle invented by employee Charles Gioirro (1935), the introduction of the automatic gateman (1935), two wind-up speed boats, an electric remote controlled airplane (1936), remote controlled trackside accessories which loaded and unloaded, and bridges that raised and lowered. In 1937 Lionel Corporation issued the Hudson Steam Engine, renowned for its accurate details, even down to the number of rivets in the tender.14 The following year the Hudson was also issued in the new smaller OO gauge with ¾ inch between rails. By 1939 the larger and more costly standard gauge trains were discontinued.

In 1937 Lawrence joined the board of directors, the public was offered stock in the company, and the company employed 1,000 workers who produced that year an estimated “40,000 model train engines, 1.2 million rail cars, and more than a million sets of track.”15 Labor and union issues caused a brief strike during this time and contributed to Mario's decision to leave the company later that decade.

With the onset of World War II, Lionel Corporation discontinued manufacturing trains to produce compasses and compass cases for the military.16 While manufacturing for the war they also offered a paper train and a railroad planning book to the public as they continued to innovate and design. After the war, the Lionel Corporation, now under the leadership of Lawrence, introduced a magnetic knuckle-coupler and realistic locomotive smoke as well as twenty wheeled GG-1 electric engines, S-2 twenty wheeled steam turbines, and dual motored F-3 diesel locomotives. By their 50th anniversary in 1950, they launched the new Magne-Traction which utilized magnets on the driving axles to increase the locomotive's pulling power.17

During the 1950s, model race cars shifted the consumer market away from Lionel's trains as did the HO gauge preferred by the professional market. Despite efforts to diversify their products, by 1959 the losses reached $1.2 million and the company was sold to Joshua's great nephew Ray Cohn's investment group. During the 1960s the company was led by a variety of presidents beginning with former U.S. Army General John Medaris and ending with rail enthusiast and toy industry executive Robert Wolfe, who made improvements but was unable to turn the company around financially.

Model Products Corporation (MPC), a division of General Mills acquired Lionel's manufacturing operation in 1967 and leased their name rights in 1969. The following year a Lionel manufacturing plant was operating in Mount Clemens, Michigan and being led by George Toteff, the president of MPC.18 George introduced building kits, fast-angle wheels with needle-point bearings, and electronic sound systems during the four years of his leadership.

As part of the Kenner Toys and Parker Brothers division of General Mills, Lionel's production was moved to Mexico in 1982 where manufacturing quality and reliability suffered. By 1984 they moved production back to Mount Clemens, in 1985 they spun off from General Mills with Kenner-Parker Toys, Inc. (KPT), and in 1986 they were acquired from KPT by Richard P. Kughn, a real estate developer and rail enthusiast. Renamed Lionel Trains, Inc. they introduced during the next decade Railscope, RailSounds, Railsounds II, electronic e-units, and reinstated quality Lionel Classic reproductions.19

Neil Young, a rock musician and model railroader, collaborated with Lionel Trains in 1992 to create TrainMaster, an easier to use hand-held controller which he could use with his son Ben who had cerebral palsy. Three years later Neil Young and Martin Davis acquired Lionel Trains. Besides renaming the company to be Lionel L.L.C., Neil and Martin re-issued the annual catalog, established an online website, and continued to manufacture the Lionel Classic and Heritage product lines. Their goal as expressed by Neil in 1995 was to “make an advanced toy that brings families together in a way videogames don't.”20