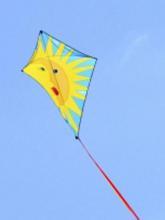 Flying kites on a breezy day is a delightful activity for children and adults alike. Kites come in many shapes and sizes, and their different designs allow for different flight maneuvers in the sky. However, the principles of flying a kite are very much the same no matter the design.

The earliest uses of kites are generally attributed to the Chinese over 2,500 years ago, and kite flying quickly spread throughout the Far East and the South Pacific. Popular legends led to ascribing the flight of a kite or a windsock to indicate good or bad omens, and many military uses were found for flying kites as well. Polynesians used kites as fishing aids to carry fishing line out away from the coast. The Egyptians, Greeks, and Romans had early histories of kites, and by the early 1600s, the conventional diamond-shaped kite became popular in Europe. By the mid-1700s, kites were used to aid scientific experiments by Alexander Wilson, who measured air temperature at various altitudes, and Benjamin Franklin, who proved lightning to be a visible discharge of electricity.1

In 1899, the Wright brothers built a small maneuverable kite to verify their ideas in controlling an aircraft, and between 1900 and 1903 they often flew their gliders as unmanned kites before successfully making their first manned flight.2 Kites were used during World War I for enemy observation and signaling. During World War II large box kites, known as Harry Saul’s Barrage Kites, were flown behind ships that discouraged enemy airplanes from flying too low over targets. Pilots downed at sea also had box kites they could fly to help identify their positions. Since the 1970s new designs of kites with new materials that made kites stronger and more maneuverable made kite flying a popular recreational activity.3

Some of the more popular kites flown by children include the diamond kite, the box kite, the winged box, the delta, and the sled. Although kites are designed differently, the forces that act on the kites to make them fly are exactly the same. Since they are heavier than air, they need to be constructed with the lightest materials possible that are still strong enough to withstand strong winds. They have a solid frame made of plastic or wood, usually balsa or bamboo, which is covered with paper, plastic, or cloth. The different designs can make some kites highly maneuverable with the ability to perform stunts while others are designed to be flown to high altitudes with more stability.4

To maintain flight, a delicate balance between aerodynamic forces of drag and lift and the weight of the kite must be accomplished. The kite flyer can feel the tension in the control line that is affected by the aerodynamic forces. The control line is connected to the kite by a string bridle attached to the kite. The bridle point where the line connects to the bridle allows the kite to pivot during flight. This bridle point can be adjusted to change the characteristics of the flight.5

To launch a kite, most kites need a wind averaging between four and ten miles an hour. The kite flyer should stand with his back to the wind and hold the kite as high as possible with the nose of the kite pointing straight up and then gently let it go. If the wind is strong enough, the kite will begin to rise and the kite flyer can begin to release a little of the control line at a time. In lighter winds a friend should hold the kite about fifty feet away and release it into the wind as the kite flyer pulls in on the control line. If the line becomes slack, it should be brought in a little. If the kite begins to pull hard or becomes unstable, more line should be let out. Gently pumping the line will often cause the kite to rise higher.

Adjusting the bridle point for different types of wind will help with control. Also tails are used on some kites to add drag to the bottom of the kite, which helps keep the nose pointed to the sky giving better stability. The length of the tail can be adjusted for better flight. Some kites also come with a bow, which is a string that pulls in the edges of the kite bent in a curve called a dihedral. This helps keep the kite balanced in the sky as the wind goes around the curved surface pushing the kite upward. This bow string can be tightened or loosened to adjust for better stability.

It is best to fly kites in an open area away from buildings, trees, power lines, and roads. These can all pose dangerous conditions for kite flying. Tall structures can also cause turbulence that makes it difficult to launch a kite. Wind at ground level is not as stable as the wind 50 feet or so in the air.

When it is time to bring the kite down, the control line can be slowly wound onto the reel. If the wind lightens, the line may need to be pulled in more quickly. Walking toward the kite and pulling the kite down steadily will help take up the slack of the line as it descends.6