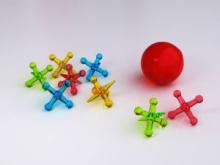 The game of jacks is a popular activity enjoyed by children. With many variations over the years, the game involves tossing small objects to be picked up in succession. The origins of the game are thought to be from Asia, although there have been many references in Greek and Roman mythology that describe games using stones or small bones. Similar games with varying names are played throughout the world, such as jackstones, fivestones, and knucklebones.1

The popular game of today involves jacks made of metal, plastic, or rubber. A jack resembles a six-pointed star with rounded heads on the ends of four points and the remaining two left somewhat pointed. This shape makes the jacks relatively easy to pick up. Jacks are generally about 1/2 inch to 1 inch in size, although some larger jacks have been manufactured for younger children to aid them in picking up bigger pieces.2

The game is played with a small bouncy ball and usually ten jacks, although some prefer to play with fifteen jacks, which is much harder for small hands to handle. Playing with only five jacks makes the game faster and easier for young children. The game can be played alone or with several children in the group.3 The children sit across from each other or in a circle on a smooth surface, such as concrete when playing outside or uncarpeted floors inside.4 A large table can also be used, but the play is done more efficiently by standing up. This increases the amount of physical exertion required to play, however, standing may reduce the length of playing time as players get tired more quickly.5

The basic game involves the first player gathering all the jacks in one hand and gently tossing and scattering them on the surface inside the space encircled by the other players. Then the ball is tossed in the air with the object of the game to pick up the designated number of jacks with the same hand and catching the ball on the first bounce in that same hand. Play starts with picking up one jack at a time until all the jacks have been picked up (onesies). Then play continues with more sets picking up two jacks at a time (twosies).7 The player continues until he fouls out by failing to pick up the required number of jacks, dropping one or more jacks, not catching the ball, letting the ball bounce more than once, or touching another jack while picking up a group. When the player commits a foul, that player’s turn ends and play passes to the next person. When it is the original player’s turn again, play must begin at the level where the foul was committed.8

When the set of jacks to be picked up leaves remaining jacks, the player can choose to pick up the set number of jacks first and then the leftover jacks. However, if he wants to pick up the remaining jacks first, he must call “cart before the horse” to inform the other players of his intention. The first player to complete the number of sets is the winner of the game.9

It takes practice to learn how to throw the jacks onto the playing surface to be successful. If they are thrown too softly, they may bunch together or stack on top of each other, which is called kissing. Often players use the kisses rule, also called Kissing Cousins, to tap the jacks apart or pick them up and toss them again. If the jacks are thrown too widely, it makes play difficult when trying to pick up sets of jacks.10

There are many variations of the game of jacks. The basic concept of the game is followed with different rules applied. Some common variations are No Bounce, Double Bounce, Pigs in a Pen, Eggs in a Basket, Around the World, and Over the Fence. These variations and many others involve differences in the use of the hands, the manner of catching the ball, and the movement of the jacks.11

The game of jacks is a good tool for building eye-hand coordination for young children. It has been promoted as a helpful tool with children with autism and sensory processing disorders to build their motor skills as well as their social skills. Because the game of jacks can be played alone or with others and requires little in the way of equipment, it has remained a popular activity for children through the years.12