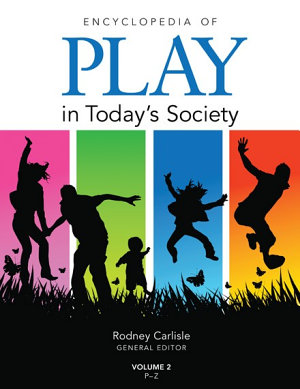 Encyclopedia of Play in Today’s Society is a two-volume book that offers over 450 entries about play. Written by 130 authors from 22 countries, the book was published in 2009 by SAGE Publications, Inc. It was edited by Dr. Rodney P. Carlisle, an author and historian who taught for more than 30 years at Rutgers University.

The study of play has produced an extensive volume of research and literature that has explored the concept of play throughout the world in many diverse cultures historically and in modern society today. This two-volume set contains a wide variety of topics including the leisure and recreational activities of children and adults throughout history as well as specific games, toys, and amateur sports they enjoy. Analyses of social thinkers such as Johan Huizinga, Lev Vygotsky, and Brian Sutton-Smith on the subject of play are also included.

A Reader’s Guide is given in the front of each volume categorizing the encyclopedia’s listings in appropriate themes to aid the reader in discovering the contents. The eleven themes are listed alphabetically:

A Chronology of Play highlights the early indications of play, games, and toys from 30,000 B.C.E. throughout the early cultures with entries that culminate in the year 2008. The origins of many games are found to have been developed similarly in different parts of the world. The invention dates of particular toys are listed with the year they were introduced.

Volume 2 contains a detailed Index for the entire encyclopedia as well as the results of two studies. Appendix A reports the findings of a poll conducted in 2008 with 1,010 adults about their leisure activities along with the collection of data shown in charts and tables. Appendix B contains the Federal Trade Commission’s report to Congress entitled Marketing Violent Entertainment to Children, A Fifth Follow-up Review of Industry Practices in the Motion Picture, Music Recording & Electronic Game Industries dated April 2007.1