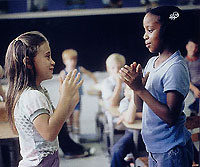 Throughout history and around the world children have been playing clapping games. Hand clapping, often in complex patterns while chanting rhymes, requires concentration, coordination, and cooperation with at least one other child. This social activity builds friendships and group identity with those who know a particular clapping game.1

Clapping games are most popular with young girls, especially between ages 7 and 10, but simple rhymes can also be taught to toddlers, such as Pat-a-cake, Pat-a-cake, Baker’s Man. Clapping games require no equipment and allow children to play spontaneously and make up the rules and create new chants as they wish.

The game usually consists of two individuals facing each other clapping their hands in a prescribed manner with a variety of clapping movements. Often each child begins by clapping her own hands together at the same time, then reaching out with the right hand to clap her partner’s right hand, followed by clapping her own hands again and then reaching out with the left hand to clap her partner’s left hand. The sequence continues with clapping on the beat. Some patterns require that players pat their shoulders or thighs while alternately clapping hands with their partner as well as clapping the backs of hands, palms, double claps, hands up, and hands down. Often the goal is to progress to a faster pace both in the song and the claps.2

The rhymes are often nonsensical and silly, and many date back hundreds of years passing from generation to generation. A popular clapping game is Miss Mary Mack:

Although children play clapping games for the sheer fun of playing, occupational therapists appreciate the unconscious skills that clapping games develop, and often use them with their patients. Clapping games require motor planning with practice of the sequence of the movements done over and over to make them automatic. The ability to keep the beat (a repetitive hit or pulse) and the rhythm (a pattern of music and movement through time) is a skill that impacts children’s lives for years to come. Keeping the rhythm of motor movements can help in learning new repetitive movements such as in dance moves and even in playing hopscotch.4

Chanting rhymes are used for both clapping and rope skipping games. The rhythm and rhymes help children internalize language and particularly become more aware of syllables in words. Communication skills including reading, writing, talking, and listening are all enhanced with these games.5 Research has shown that clapping games influence motor and cognitive development. One study found that children who enjoyed clapping games had neater handwriting, could write better, and made fewer spelling errors than those children who did not participate in the games. 31 Aug. 3016." href="#footnote6_h2fm5bs">6