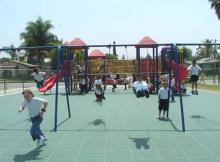 Recess for children is typically enjoyed outdoors and has been defined as a break period from the relatively inactive routine of the classroom. Traditionally, recess has been loosely structured and has allowed children to freely choose their activities and playmates on the school playground. Recesses usually last 10 to 20 minutes, and most children choose vigorous activities, whether playing tag, climbing on playground equipment, or playing games with balls, jump ropes, and other equipment.1

Research has shown that play is essential for children’s physical, social, and emotional development, and that recess has a strong positive impact on academic achievement.2 Recess is an appropriate outlet for reducing stress, and physical activity improves attentiveness and decreases restlessness in the classroom.3 Children demonstrate improved alertness, focus, and memory recall after recess breaks, and findings of nearly 200 studies consistently show that physical activity supports learning.4

The National Association for Sport and Physical Education (NASPE) has released guidelines for school age children. It recommends that children have at least 60 minutes of moderate to vigorous physical activity every day, with a variety of activities of various levels of intensity. This physical activity can be broken up into segments of 15 minutes or more, as time allows. NASPE also advises that extended periods of inactivity are not developmentally appropriate for children.5 With the health risks of childhood obesity, children need to get adequate exercise each day to maintain a healthy weight; build stronger muscles, bones, and joints; and decrease the risk of developing type 2 diabetes.6

As more and more children become latchkey children with little interaction with others after school, recess becomes an important opportunity for them to engage socially with children. The development of social skills is actively involved in recess activities as children make choices, develop rules for play, and organize games. Children are free to participate in the play or withdraw to other activities.7 They learn to resolve conflicts, cooperate, share, and take turns to keep the game going. Learning to change roles in games allows children to view events from different perspectives.8

Recently many school districts have drastically reduced or eliminated recess. Viewing recess as a waste of time, there has been increased pressure to concentrate on improving academic test scores fueled by the 2001 No Child Left Behind Act. Sacrificing recess, however, may actually hurt academic performance and produce the opposite result. In addition, some administrators fear lawsuits if children are injured on the playground.9 Recently, some elementary schools have banned some traditional childhood games as being too dangerous, such as tag, soccer, and touch football, citing that children can get hurt and that the games can become too violent.10

With a shortage of supervisors during recess, many school officials view recess as disorganized and difficult to manage, and feel they encounter the majority of their disciplinary problems during recess.11 However, programs that support more structured activities during recess give guidance for children to learn conflict resolution skills to use among themselves without relying on a supervisor.12