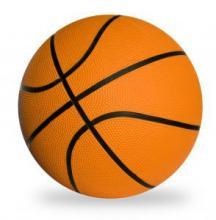 The game of basketball is a team sport enjoyed both on the school playground and on indoor courts. Two teams of usually five players each attempt to score points by tossing a basketball through a net at opposite ends of the playing court. The relative ease of the rules of the game and the little equipment needed make basketball one of the most popular games played today, and many families have basketball hoops in their driveways for family fun.

The game was devised in the winter of 1891-1892 to remedy the need for an indoor activity for young men in Springfield, Massachusetts, during the cold winter. Dr. Luther Gulick, the superintendent of physical education at Springfield College, then known as the International YMCA Training School, challenged his students in a course on the psychology of play to invent a new game “that would be interesting, easy to learn, and easy to play in the winter and by artificial light.”1

James Naismith, a second year graduate student who was on the teaching faculty, took up the challenge to devise a game for his physical education students. He had the school janitor nail two peach baskets to the lower rail of the gymnasium balcony, one at each end, which was at a height of ten feet. James drew up thirteen rules, which described how the ball would be moved down the court and what constituted fouls, and then introduced the game to his class. The game was an instant success and it quickly spread to YMCAs and other colleges around the country.2

The original peach baskets were soon replaced by nets attached to metal rims, although the nets were closed until 1906, when nets with holes at the bottom allowed the ball to pass through the hoop. The original ball was a soccer ball until 1894 when James asked A.G. Spalding & Bros. to develop a ball specifically for basketball. Their first basketballs had panels that were stitched together with visible laces and contained rubber bladders. In 1937, Spalding removed the laces, and by 1942 the company had developed molded, factory-made balls that were more consistent in size and shape.3

The basketball court is divided into two halves with a basket at either end, which is 10 feet in height. There is a 3-point line drawn at each end of the court that is a semi-circle that starts and ends on the baseline, three feet from each sideline. Points are scored by shooting the ball through the hoop of the opponent’s side. For shots made outside the 3-point line, 3 points are awarded. Shooting within the 3-point line and the hoop allows for 2 point shots. Free throws, which are shot attempts given while standing on a line 15 feet from the hoop, are worth 1 point each. Free throws are awarded to players who have had a foul committed against them, such as being pushed. Other fouls are called for impeding the progress of another player and unsportsmanlike conduct. Violations result in turning the possession of the ball over to the team, which can be time violations or ball handling violations.4

There are five basic skills that are required for the sport of basketball: dribbling, shooting, running, passing, and jumping. Dribbling is a continual bouncing of the ball off the floor, which must be done in order for the player to move down the court. Being able to dribble equally well with both hands is best. Shooting the ball requires precise aim, proper handling of the ball, arm extension, and lift from the legs. Different types of shots, such as layups, jump shots, and free throws, require different techniques. The game requires running back and forth on the court, and the ability to pass the ball quickly and accurately sets up a player to make a shot. Jumping is often required in a defensive block of a shot as well as in an offensive maneuver to make a shot or catch a pass.5

Playing basketball offers many benefits for children. Basketball offers good physical activity that can be enjoyed all year, especially during winter weather when play can be done indoors. As with other team sports, basketball teaches team skills that help children work together to become successful in a basketball game. Developing the motor skills required to run, dribble a ball, and shoot for a basket take practice and considerable effort.