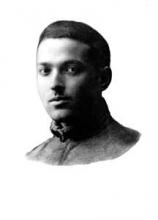 Lev Semyonovich Vygotsky was a Russian psychologist who was born in 1896 in Belorussia, now known as Belarus. He received a law degree from the University of Moscow but also studied literature, linguistics, sociology, psychology, philosophy, and the arts. After graduation he returned to his hometown of Gomel to teach literature and philosophy. While there, Vygotsky set up a research laboratory at the Teacher’s College of Gomel and began to practice clinical psychology.1

In 1924, Vygotsky made a presentation at the Second All-Russian Psychoneurological Congress in Leningrad comparing methods of reflexological and psychological investigation, which was very well received. From this success he was offered a position at the Psychological Institute of Moscow where he had the opportunity to read a vast amount of published literature on the subject of psychology and work on a variety of projects. In 1925, Vygotsky finished his dissertation, The Psychology of Art: Consciousness as a problem in the psychology of behavior. He began special education services in Russia and had a lifelong interest in children with learning disabilities. Vygotsky studied the psychology of education and remediation and was a leader in turning psychology from a field of activity into a discipline of inquiry.2

Vygotsky developed a model of human development from a sociocultural approach. He felt a child’s mental development, such as thought, language, and reasoning, was a result of his culture and best understood to develop through social interactions with others. He believed: “Every function in the child’s cultural development appears twice: first, between people (interpsychological) and then inside the child (intrapsychological). This applies equally to voluntary attention, to logical memory, and to the formation of ideas.”3

Vygotsky opposed the use of standardized tests as a measure of a child’s intelligence. He suggested it is better to compare the child’s ability to solve problems independently with his ability to solve problems with the assistance of someone who has already mastered the concepts being learned. Vygotsky’s view was that social interaction is the basis of cognitive growth. As a child communicates in a social setting with more knowledgeable people, he is assisted in building an understanding of the concepts to be learned.4

Vygotsky developed the concept of the Zone of Proximal Development (ZPD). His famous definition is “the distance between the actual developmental level as determined by independent problem solving and the level of potential development as determined through problem solving under adult guidance, or in collaboration with more capable peers.” In other words, the zone of proximal development is the area where the child cannot solve a problem alone, but can solve it successfully under the guidance or collaboration with an adult or more advanced peer.5 The person with the better understanding or higher ability than the learner was referred to as the More Knowledgeable Other (MKO). Though normally thought of as a teacher, coach, or older adult, it could also be a peer or a younger person.6

The aid given by a More Knowledgeable Other was later called scaffolding. This can come from a number of sources, including direct instruction, encouragement, and observation of others.7 Often, children can solve problems on their own with a little assistance from an adult. In a classroom setting a teacher can offer hints and leading questions to assist children in solving problems independently without solving the problem for them.8

Play researchers appreciate Vygotsky’s views on play. He was an advocate of pretend play as a critical part of childhood allowing a child to stand “a head taller than himself.” He explained that when a child can pretend that a broomstick is a horse, he is able to separate the object from the symbol. The ability to think abstractly is aided by pretend play.9

Lev Vygotsky died in 1934 at the age of 38 after contracting tuberculosis. He wrote over 180 papers during his lifetime, but his work was blacklisted under Stalin in 1936. His work was finally recognized in the 1970’s and many of his writings were published 50 years after his death. Vygotsky has greatly influenced psychological and educational thinking and practice around the world.10