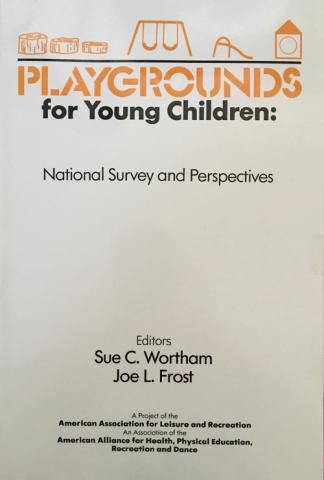 Playgrounds for Young Children: National Survey and Perspectives was edited by Sue C. Wortham and Joe L. Frost. The book was published in 1990 by the American Alliance for Health, Physical Education, Recreation and Dance.

The book represents the last of three national efforts undertaken by the Committee on Play, a committee of the American Association for Leisure and Recreation, whose parent group was the American Alliance for Health, Physical Education, Recreation and Dance (now known as SHAPE America). The earlier two surveys studied elementary school (1985) and community park playground equipment (1989). This book reports the findings of the Preschool Playground Equipment Survey done in 1988, which is the result of 349 surveys conducted by 62 trained volunteers in 31 states.

Chapter 1 “Introduction” was written by Sue C. Wortham and Joe L. Frost, the editors of the book. This chapter poses the two questions the book intends to answer: What is the ideal play environment for young children in the early childhood years, and what is the current status of playgrounds for preschool children? Their recommendation is that the best early childhood play environment is more than just a play area equipped with play structures. It is an environment that includes the natural features of the landscape and opportunities for children to engage in social, fantasy, and creative play as well as physical play.

Chapter 3 “Results of the Survey,” also written by Louis Bowers who directed the study, provides 17 tables showing the results of the National Survey of Playground Equipment in Preschool Centers. The study included 2,447 play structures such as swings, slides, climbers, and seesaws; 2,783 portables materials such as tricycles, loose tires, sand, and building materials; and 2,919 other provisions such as tables, grassy areas for organized games, shade structures, and play houses. The study also surveyed trees, pathways, and signs.

Chapter 4 “Young Children and Playground Safety” was written by Joe L. Frost and contains statistics on the scope and causes of injuries on playgrounds; general hazards  found on playgrounds, such as entrapment, heights, protrusions, and suspended hazards; and key safety elements for playground equipment to prevent playground injuries. Various types of playground surfacing materials are also presented with advantages and disadvantages of each type.

Chapter 5 “Play Environments for Young Children: Design Perspectives” was written by Steen B. Esbensen. He gives an historical perspective to past playground designs including adventure playgrounds, the environmental yard concept developed by Robin Moore, work yards using salvaged materials, and creative playgrounds adapted from adventure playgrounds as well as the influence of safety concern in the 1970s and 1980s. Esbensen suggests that preschool play environments should be learning environments that encourage child-initiated, teacher-supported activities, and he describes desirable design features in terms of the types of developmental play they should provide.

Chapter 6 “Infant-Toddler Playgrounds,” contributed by Sue Wortham, describes the need for play environments designed specifically for the developmental needs of infants and toddlers. Showing how play influences the development of infants and toddlers, she gives suggestions for how play environments can be designed to meet their needs. She also emphasizes the importance of outdoor play for babies and young children.

Chapter 7 “Advances in Playground Equipment for Young Children” was written by Marshal Wortham. He gives an overview of the changes and evolution of play equipment that have been influenced by the availability of new materials and manufacturing advances. The large growth in child care facilities has also influenced the growth and changes in the playground market for younger children.

Chapter 8 “Maintaining Play Environments: Training, Checklists, and Documentation” was written by Donna Thompson, Larry Bruya, and Mike Crawford. They include in this chapter guidelines and checklists for assessing playground features for safety and maintenance including procedures for safe installation, maintenance, and inspections of playground equipment.

Chapter 10 “The Role of Adults in Children’s Play” was written by Tom Yawkey who proposes that adult involvement in children’s play has benefits for child development through pretend play, social play, and persistence in play. Adult support in children’s play also benefits language and cognitive competencies and signals to children that adults approve of their play.

Chapter 11 Outdoor Play – What Happens Here?” was written by Mary Rivkin who expresses concern that urban children have few opportunities for outdoor play and that there has been little research done on the benefits of outdoor play for children. She reviews the literature on child developmental studies on play and outdoor play environments of various cultures.

Chapter 12 “Magical Playscapes” was written by James Talbot and Joe Frost who express their dissatisfaction with the trends to replace natural play environments with manufactured play equipment. They suggest nineteen design principles for those who would build magical places for children to enjoy.