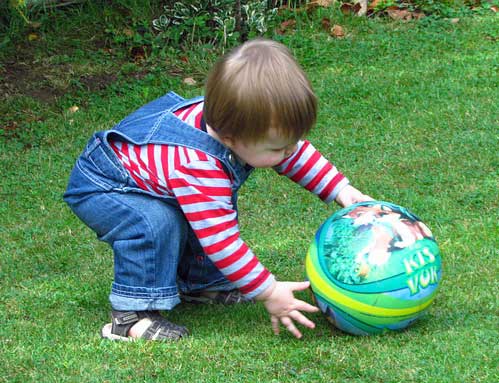 Children learn that they have their own personal space as well as the general space available around them and the restricted space in which they may move. They also learn their body can take on different shapes as it assumes different positions, can travel in different levels in relation to the ground, and can follow various pathways as it moves through space.2

Spatial awareness is a complex cognitive skill that requires an organization of the knowledge of objects in relation to oneself as well as in relation to each other. It also involves understanding the relationships of objects as they change position. Concepts such as distance, speed, and placement are developed as part of the overall perception of objects as children experience moving in space.

Initially for a very young child, spatial awareness is based on location. As the child reaches for a toy, he learns how far to stretch the muscles in his arms to reach the object. Proprioception is developed as a child becomes aware of where his limbs are in space. As the child reaches for the object a second time, he begins to recognize how far he must stretch his arms to reach the distance of the toy. This learned knowledge is then applied to similar objects and situations.3

To accomplish the simple task of reaching for an object, many complex signals are sent from the nerve endings in the joints and muscles in the fingers, wrist, and arm that send signals to the brain. The brain responds with signals to the body prompting further coordination of the child’s visual perception, muscle control, and movement planning. As a child begins to crawl and move on his own, his vestibular coordination is also developed to help him keep his balance and remain upright.

As a child begins to walk, he begins to understand that from far away an object looks smaller, while from close up, the object looks larger. A favorite toddler activity of putting blocks in and out of a container develops spatial relationships, such as the concepts of in, out, full, and empty. These spatial concepts are developed over time as the child’s interactions with people and objects are expanded to include more situations.4 As people around the child reinforce spatial concepts with verbal cues, the child begins to understand relationships of locations, comparisons, distances, and directions, with terms, such as on, under, bigger, smaller, closer, farther, left, and right.

Most children develop spatial awareness naturally as they explore their world and engage in play. There are many reasons why children may have poor spatial awareness. Children with a physical or learning disability may shows signs of difficulty as well as children with autism or Asperger’s Syndrome.5 These children often have difficulties with visual perception. They may appear clumsy, bumping into things. Playing ball games may be difficult for children who have difficulty judging the speed and distance of an oncoming ball. They may have difficulty judging where to stand on the field or in relation to other players.

Poor spatial awareness can lead to difficulties in mathematics due to the abstract nature of the subject, particularly with the concepts of space, shapes, area, and volume. Writing may be difficult with knowing how much pressure to exert on the pencil to write legibly. Difficulty following positional instructions, such as left, right, over, or under, may be another indicator of poor spatial awareness.

Occupational therapists use many activities to assist in improving spatial awareness for children. Throwing beanbags into buckets and similar target games are excellent therapy for judging distance. Obstacle courses and jungle gyms help children learn how to position their bodies in relation to obstacles. Moving to music and dancing helps with speed and pacing. Putting jigsaw puzzles together and building models with building instructions both help with eye-hand coordination and understanding relationships.6