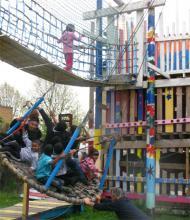 The original concept for adventure playgrounds began in Europe in 1931. C. Th. Sorensen, a Danish landscape and playground designer, saw children playing everywhere except at the traditional cement and asphalt playgrounds. The idea that children would rather play with dirt, rocks, lumber, etc. started a revolution in the playground industry.

Endrup, Denmark was the first city to build a playground with this new concept in 1943 during World War II. It was a large lot stocked with building materials. Lady Allen of Hurtwood, a prominent British landscape architect and president of the World Organization for Early Childhood Education, was impressed with this “junk playground,” and in 1946 she brought this new themed playground idea to London. Her concept was that there should be hills, puddles, grass, etc. and absolutely no asphalt. The main features were to be: 1) enough pipes, ropes, bricks, lumber, hammers and nails where with very little supervision, children could build and paint playthings that they wanted like swings, tree houses, forts, etc. 2) a central pavilion for children to get in out of the rain and to hold meetings.1

To date there are approximately 1,000 adventure playgrounds in Europe, most of them are in England, Denmark, France, Germany, The Netherlands and Switzerland. Japan also has a significant number of adventure playgrounds. However, in the United States there are only a few adventure playgrounds at this time. Huntington Beach, California’s Adventure Playground was one of the first in the country starting in the ’70s. Berkeley, California’s Adventure Playground has been in business for over 30 years. Others that were built in the U.S. closed due to a loss of funding or the loss of the lease on the ground.2

These playgrounds are designed especially for children 7 years of age and older. However, younger children are admitted if they bring a participating adult and stay in specific areas without older children or tools. Most playgrounds in the U.S. are not supervised; however adventure playgrounds do have staff trained in child safety and offer encouragement to the children to play and build creatively. These challenges enable children to gain self-confidence and learn cooperation. In California’s Adventure Playgrounds, there is a fee of $10.00 for children over 7 that arrive without an adult.