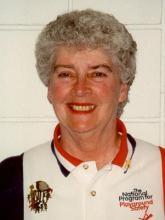 In 1974, after a doctoral degree in Physical Education and Curriculum from Ohio State University in Columbus, Ohio, Donna taught for one year at Kansas State University in Manhattan, Kansas. She moved to the University of Northern Iowa (UNI) at Cedar Falls, Iowa, where she is a full professor and would work for 35 years.

As an elementary school teacher Donna began to “question the relationship between the playground equipment on the playground to the curriculum that she was teaching the children.”2 These questions were later echoed in her PhD dissertation topic: “Selected Dimensions of Space as Criteria for the Selection of (Playground) Equipment for Children in an Outdoor Learning Environment.” She wondered how playground equipment related to teaching children to move efficiently and effectively, which was part of the physical education curriculum.

While at UNI, Donna was the editor of the Iowa Association for Health, Physical Education and Recreation Journal from whom she received an Honor Award in recognition of her work. She also served as Vice President of the Conestoga Council of Girl Scouts and as Secretary of the Black Hawk County YWCA.

As Donna's interest in playgrounds became more and more focused on playground safety, she became involved in the establishment of safety standards. She chaired the ASTM International (ASTM) F15.44 committee concerning play areas for children under two and was secretary of the ASTM F15.29 committee on public use playgrounds. And, in 1991, Donna helped create the National Recreation and Park Association (NRPA) National Playground Safety Institute (NPSI).

During the 1980s and 1990s, Donna served as chair of the Committee on Play of the American Association for Leisure and Recreation (AALR), who conducted a national assessment of child care playgrounds, elementary school playgrounds, and community park playgrounds. These assessments were edited and published with Donna's assistance. Donna also served as president of the AALR and received their Outstanding Achievement Award and the American Alliance for Health, Physical Education, Recreation and Dance’s Honor Award.

Besides contributing to safety standards, Donna has authored or co-authored numerous monographs, articles, books, and chapters in books as well as published technical reports and materials. She has been involved in producing films and instructional computer programs, and has written more than 180 articles for numerous journals. Donna has made more than 180 presentations nationally and internationally about playground safety issues as well as on several national television shows, including NBC’s Today Show. Donna is also the co-founder of Safety First, a playground safety consulting business.3

With the establishment of the National Program for Playground Safety in 1995, Donna led the organization in the creation of a clearinghouse on playground safety and in the education of the general public through the easy to understand S.A.F.E. Program. The development of the NPPS Safety School and online safety training programs for playground supervisors and administrators and the continued support of research on playground safety have also been important to the mission of NPPS.