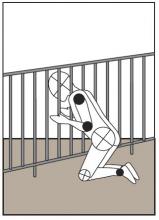 Entrapment is defined as “…any condition which impedes withdrawal of a body or a body part that has penetrated an opening.”1

The ASTM International (ASTM) Standard F1487 and the U.S. Consumer Product Safety Commission (CPSC) Public Playground Safety Handbook address the types of entrapment that might cause a life threatening injury. These are head and neck entrapment.

Younger children are especially vulnerable to head entrapment. They can put their bodies into a small opening and then their head won’t fit through. They don’t have the reasoning ability to turn their heads to try and get unstuck. The result can be strangulation. The possibility of this type of an injury is increased when children are allowed to wear bicycle helmets when playing on playground equipment. Helmets cannot pass through many openings, and children may become entrapped when the helmet gets stuck.

A Certified Playground Safety Inspector (CPSI) has probes or templates that represent a child’s torso, head, and neck, and routinely checks all openings or gaps on play equipment to be sure that they are not potential head or neck entrapments. Inspectors learn test methods to evaluate completely bound openings that are rigid, such as the openings between the rungs and under the rungs of guardrails and barriers, between decks, and completely bounded openings that are flexible, such as climbing nets.

The gaps that are considered head entrapments on rigid equipment measure more than 3.5” and less than 9”. An entrapment hazard on flexible equipment exists when the perimeter of the net opening is between 17” and 28”.2

Children can also become entrapped by partially bound openings. These openings are referred to as neck entrapments by inspectors. Partially bound openings are found along the outside edge of play equipment at the connection between different types of play components such as a bridge and a panel on a platform. They are also found in areas such as slides where the angles formed by two accessible adjacent parts are less than 55 degrees and the opening is above a level plane.3

The other types of gaps are caused by a number of reasons. Gaps that do not allow a torso probe to pass through may still be big enough to trap little knees. This is not life threatening and is thus not covered in the ASTM standard. Other gaps can be caused by improper installation or by weathering due to the age of the equipment. The older the equipment is, the more gaps are likely to be found.

It is important that playground supervisors watch for gaps that can lead to potential entrapment hazards, so the playground experience can be a safe and happy one.