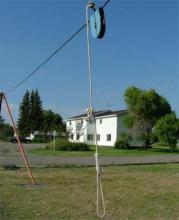 A suspended hazard is a non-rigid component such as a cable, wire or unattached swing chain that is suspended between play structures or from the ground to the play structure that is within 45 degrees of horizontal, unless it is above 84 inches and is a minimum of 1” wide at its widest point. In addition, the rope, cable, or chain must be fastened at both ends and may not be capable of being looped back on itself creating an inside loop perimeter greater than 5 inches.1

The following are exceptions to this specification:

Some examples of suspended hazards are:

In addition to following the ASTM International specification for suspended elements, it is also suggested that the elements be brightly colored so they contrast with the surroundings so playground users can see them easily.7 The U.S. Consumer Product Safety Commission recommends that suspended components “…be located away from high traffic areas.”8

Playground owner/operators are responsible for following this specification.