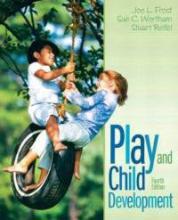 Play and Child Development is designed primarily as a textbook for upper division students to guide understanding of how play ties directly to child development. Research on play topics, historical views and theory, and current play trends and play therapy are blended together to give practical applications and learning approaches across various ages and developmental levels of children. The text is intended to help prepare those who support children’s play in a number of contexts including preschools, elementary schools, park systems, and research programs.

Play and Child Development, written by Joe Frost, Sue C. Wortham, and Stuart Reifel, was first published in 2001 by Prentice-Hall, Inc. The book was updated several times, and the Fourth Edition was published in 2012 by Pearson Education, Inc. Two of these editions were translated and published in China and Korea.

Chapter 1, Play’s History: Ideas, Beliefs, and Activities includes the history of play philosophies and practices beginning with the ancient Greeks, Plato, Socrates, Aristotle, and Xenophanes, and then exploring the views of philosophers in the 1600s through the 1800s, such as John Locke, Immanuel Kant, Friedrich von Schiller, Johann Pestalozzi, and Friedrich Froebel. Play theory was further developed by G. Stanley Hall, Maria Montessori, John Dewey, and Johan Huizinga.

Chapter 2, Theory as Lenses on Children’s Play presents various play theories that dominated the 1900s as tools for understanding different aspects of children’s development, especially as they relate to communications and language, cognition and learning, social relationships, and creativity. The theorists studied include Sigmund Freud, Gregory Bateson, Catherine Garvey, Lev Vygotsky, Jean Piaget, and several others who have helped frame contemporary play theories and research.

Chapter 4, Play: Infants and Toddlers addresses the value of play for children’s development in their first two years. Their emerging senses are developed as they explore their world and gain gross and fine motor skills as well as rapidly expanding their cognitive, language, social, and emotional skills. These developmental changes are enhanced through play and play toys.

Chapter 5, Play in the Preschool Years suggests that play is the leading source of development for children between the ages of 2 and 6. The fundamental movement phase occurs during these ages when children develop the skills to run, jump, throw, and catch. The cognitive development of children expands to include symbolic play, constructive play, dramatic play, and games with rules. Play activities include block play, rough and tumble play, chase games, and superhero play.

Chapter 6, Play and the School-Age Child describes the advances in development that allow children to enjoy play activities that include games and sports with their peers. The concept of team play is developed as well as social relationships, self-concept, and self esteem. Aggression and bullying are two negative behaviors that can result from social play and are discussed.

Chapter 7, Culture and Gender in Play delves into the issues of culture and gender differences in how children play with toys, socially with each other, and in pretend play scenarios. These differences are often influenced by values and beliefs to some degree of different cultures.

Chapter 8, Play and the Curriculum promotes the integration of play into curriculum for children to facilitate their learning. The predominant theories are discussed along with practical suggestions for building a play-based learning environment. There are three basic approaches to classroom play: a trust-in-play model where children play on their own with minimal teacher involvement; a facilitate-play model where adult-child play interaction facilitates play such as sociodramatic play or games with rules; and a learn-and-teach-through-play approach that includes a curriculum that is designed to achieve specific academic goals through play.

Chapter 9, Creating Play Environments describes the importance of outdoor play environments including both natural and built. To contrast with the traditional built playground equipment, this chapter describes natural environments that encourage play with natural elements such as sand and water, tools, and materials for construction. Learning environments that include play can be found in schools, parks, children’s museums, summer camps, and nature centers.

Chapter 10, Play and Children with Disabilities focuses on how children with special needs engage in play and what adaptations may be needed in the play environment to allow play for all. The nature of disabilities can include physical impairments; social or emotional disorders, such as autism or Attention Deficit Disorder; sensory impairments, such as hearing, and visual; and health impairments, including cognitive and language delays.

Chapter 11, Computers and Technology as Emerging Toys attempts to describe the issues of media play for children as related to the research available at the time of writing. The concerns about the negative effects of misuse and overuse of technology in media play are debated.

Chapter 12, Introduction to Play Therapy explores the therapeutic benefits that play naturally gives as well as the growing use of play therapy by professionals to help children express their feelings, emotions, and phobias. The history and theories of play therapy are explored along with descriptions of conducting play therapy sessions.

Chapter 13, Child Safety in Public Places: Indoors and Outdoors addresses the balance needed between allowing children to experience reasonable risk at play that builds their physical and cognitive skills essential to discerning risky play and the need for minimizing risk for children that could result in serious physical harm. National playground safety standards and other safety issues are examined.

Chapter 14, Playwork in American and European Playgrounds reviews the growing interest in playwork and play leadership by adults for children. The theories and history of adult involvement with children’s play are addressed along with the current recommendations for playworkers.1