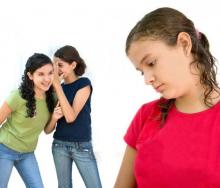 Bullying has been defined as a type of aggressive behavior that causes distress or harm, demonstrates an imbalance of power, and is repeated over time. The child being bullied usually has a difficult time defending himself, while the bully gets great satisfaction from his aggression, perpetuating the bullying cycle.1

There are three major forms of bullying—physical, emotional, and verbal. Physical bullying involves physical contact that causes discomfort to another person. Emotional bullying is aggressive behavior without the use of words, such as in ignoring or excluding another. Verbal bullying uses words to be hurtful and is also referred to as psychological bullying. A bully might use a combination of these three forms of bullying, especially combining verbal and emotional bullying.2

With the pervasive use of technology, cyberbullying has become a serious problem. Using electronic forms of contact, such as emails, text messages, and social networking sites, cyberbullying can involve sending mean, vulgar, or threatening messages or images to others, posting sensitive information or lies about another person, or pretending to be someone else in order to make that person look bad.3 Because the bullying attack is not “face to face” with the one being bullied, the bully does not see the victim or its impact on him. Cyberbullies often don’t realize that their actions are as damaging as physical bullying.4

Studies done in the U.S. have shown that between 15 to 25 percent of students are bullied with some frequency, while 15 to 20 percent report that they bully others with some frequency. The rate of bullying peaks in middle childhood and decreases over the high school years with almost 43 percent of 6th graders reporting being bullied compared to about 24 percent of 12th graders. Research also has shown that children with special needs or disabilities are at a higher risk of being bullied than other children.5

There is a variety of complex and contradictory behaviors that are seen in bullies. Some bullies have an exaggerated air of self-confidence and enjoy the feelings of power. They may use their bullying behaviors to solidify their feelings of self-worth. They may even be popular students who perversely enjoy using their social skills to promote violence. Others can be recognized by their emotional immaturity with their feelings of inferiority, inadequacy, insecurity, fear, loneliness, and rejection. These bullies may have persistent feelings of self-loathing and depression. Bullies are often consumed with fear and jealousy.7

Bullies lack empathy, tend to be impulsive and hot-headed, become easily frustrated, and have difficulty following rules. They often come from homes where parents lacked warmth and involvement, were overly permissive, gave little supervision, and disciplined their children harshly.8 Children who experience early abuse or neglect are at greater risk of becoming aggressive. These children learn to use violence to express their anger or assert their power rather than feeling empathy for their victims.9

Children who bully are more likely to get into frequent fights, vandalize property, steal property, drink alcohol, smoke, skip school, drop out of school, and carry a weapon. Research has shown that boys in middle school who are bullies are four times more likely to have more than one criminal conviction by the age of 24.10

The issue of bullying has been taken more seriously in recent years with the escalation of school violence. The U.S. Department of Education has established guidance for educators in combating bullying in school by clarifying when bullying might violate federal anti-discrimination laws. Most states have anti-bullying laws, which has led to increased teacher training, character education, and sensitivity programs.11

There have been many unsuccessful programs tried to deal with bullying. Zero tolerance policies expel the bullies from school, but don’t change their behavior. Group therapy with other offenders could promote bad behavior rather than supplying bullies with good role models. Trying to put the bully and the victim together in a conflict resolution program only worsens the victim’s stress.12

Training teachers to be watchful and proactive in dealing with bullying behaviors can reassure children that adults will protect them in difficult situations. Teaching children to understand their responsibilities as bystanders of bullying behavior can help them outside of school. Bystanders often fear that the bully would turn on them if they try to intervene. Although this could happen, if two or more children confront a bully and consequences are enforced, the bully will usually back down.13 An organization called Everyday Heroes promotes instilling in children the self-belief that they are “heroes-in-waiting” who will act heroically to help others when they are being victimized.14

To teach children empathy, a program started in Canada in 1996, called Roots of Empathy, has spread to the United States and several other countries. The program begins in kindergarten and runs through seventh grade. Every month a mother and her young baby make school visits allowing children to observe and interact with the baby. As they try to understand the baby’s feelings they learn to take perspective which leads to empathy. To create a caring environment, children need to be engaged collectively in an activity that benefits another human being. Children’s behaviors are actually changed as they interact with the baby allowing tough kids to smile, disruptive children to focus, and shy children to open up and be involved. Developing human compassion and empathy through this program has greatly reduced aggressive and bullying behaviors in the students who participated.15