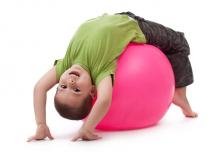 The fundamental movement phase occurs between the ages of 2 and 7 as children gain control over their gross motor and fine motor skills. During this phase children learn the basic stability, locomotor, and manipulative skills.2 Stability, nonlocomotor skills include stationary actions, such as bending, twisting, and stretching. Locomotor skills involve traveling, such as running and jumping. Manipulative skills involve controlling an object, such as bouncing and catching a ball.3

Moving from the simple to the complex, a logical progression of motor skills is essential for children to achieve optimal motor development. Children learn to walk before they run; bend and stretch before they twist; and throw a ball for distance before throwing for accuracy.4 Most children learn fundamental movement skills in the same sequence. As they mature, more nerve cells make more connections and the muscles of the body are getting stronger. Until the brain is mature enough and the muscles are strong enough for a particular motor skill, the child will not be successful at mastering it.5

Within the fundamental movement phase there is a continuum of stages that progress from the initial to the elementary to the mature stage. In the initial stage children make their first attempts at performing the task. Their movements are relatively crude and uncoordinated in this stage. Typically two and three year olds function at this initial stage. The elementary stage shows an improvement in coordination and rhythm with children gaining greater control over their movements. Primarily children aged three to five perform at this elementary stage. By ages six or seven, children can integrate their movements into well-coordinated, mechanically correct, and efficient acts in the mature stage.6

Children acquire movement skills at varying rates. Maturity and physical activity alone do not ensure that children will develop the fundamental movement skills needed as they continue into their teenage years. Children need instruction from supportive adults as well as an abundance of opportunities to practice and refine their skills during the fundamental movement phase.7 Opportunities for instruction, practice, and encouragement are crucial, and children should be provided with a range of physical challenges, regardless of their abilities, to exercise and extend their skills. Motor skills are developed naturally on the playground during free play. With the wide range of playground equipment available, the development of a variety of motor skills is promoted.8

Mature fundamental movement skills are the basis for all sports skills. Failure to acquire these skills can cause frustration for children as they experience failure in recreational and sports activities later.9 However, organized sports for children ages five to eight have been studied, and it has been determined that almost half of these children lack minimum skills necessary to play organized sports. There are also young children participating in dance, gymnastics, and karate who lack the necessary skills. It is important that the fundamental skills be developed to ensure success in these physical activities.10

There are many benefits derived from the development of fundamental movement skills. Children’s needs and desires for movement are met, and exercise builds muscles and strengthens the heart. Motor activities enhance much of young children’s cognitive development as well as language and social development. As children improve in their movement skills, good self-concept is promoted as they gain self-confidence.11