Playborhood: Turn Your Neighborhood into a Place for Play 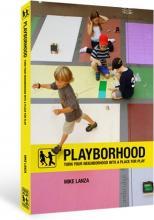 Mike Lanza wrote Playborhood: Turn Your Neighborhood into a Place for Play as a “road map” for solving the “free play problem” confronting families living in a world of safety fears, school encroachment, and adult structured activities. Besides identifying the challenges to “inner-directed” childhood free play, Mike highlights eight diverse neighborhoods where free play is being supported and then outlines six key suggestions for creating such a neighborhood where children can “laugh and run and think... every day.”1

He starts with a Playborhood Manifesto which clarifies the goal of a “playborhood”: children playing outside together daily, creating their own simple and complex games, deciding for themselves “what to play, where, and with whom,” settling their own disputes, initiating private clubs with secret rules, and building their own play spaces.2 Based on this vision of a basic childhood of bygone years, Mike explores the necessary issues of “parenting, education and the building of a trusting, life-sustaining neighborhood.”3

Declaring that “the neighborhood play problem is more a social problem than an aggregation of individual problems,” he maintains that the “single social factor that...if changed, will lead to more children's free play is the attractiveness of their neighborhood...Neighborhoods rate very low in the minds of children when compared to all the other alternatives to allocate their attention and time.”4 He frames the problem as not truly about electronic games, structured activities, safety, or homework, but rather about the lack of child interest in the yards designed for adult satisfaction.

For Mike and his family the solution was to put their available money into play features in their front yard rather than into house furnishings. To create a “kid magnet” for play in their front yard they have invested in white boards and markers, a smooth driveway for games and neighborhood art, a picnic table with benches that have waterproof storage for games and a media system, a small fountain and play river for water play, a sandbox, an appropriately-sized basketball hoop, and family-significant mosaics and art work.

Their other play options include a back yard with a large playhouse, an in-ground trampoline, and a swing set and the nearby creek. The Lanzas were careful to buy a home in a neighborhood that had little traffic, other kids to play with, a play supportive school nearby, and community interests within walking distance.5 To encourage play within their own family they have limited screen time for their young children, created sufficient fun alternatives for outside play, and prioritized their time in order to play with their children as much as possible.

Even with sufficient enticements to be outside playing, as outlined above, they still found resistance to a neighborhood play culture and the resulting free play among the children and parents on the block. Mike refers to this network effect as being an “all-or-nothing” reality that necessitates “a very big push to make the transformation from a zero-play neighborhood to a Playborhood.”6

For the Lanzas this included “play evangelism” in the form of regular invitations to join the fun, an open yard policy, and having frequent “big kid” children parties, and holiday celebrations. They also often eat meals al fresco on the picnic table in the front yard which facilitates connections with passing neighbors, children and adults alike. Mike maintains that many of these activities assist to create a Child's Village and declares that “it takes a village – an old fashioned, tight-knit neighborhood – to raise a child.”7

Besides their own experiences, Mike highlights successful “playborhoods” in such diverse environments as a Bronx street; a Portland, Oregon intersection; a co-housing development that joined backyards; and an Alabama planned community that is built around common space and walking instead of car travel and private “adult centered” yards. He also highlights playscapes in individual yards, seasonal neighborhood activities, and the value of summer camps held in the neighborhood.

As a blogger and author, Mike is spreading the “playborhood cultural movement” to re-educate parents what a healthy childhood involves. In Playborhood, he mentions other movements “to rescue children's play,” including the Children and Nature Network movement led by Richard Louv, the Free-Range Kids movement led by Lenore Skenazy, the movement for play-based curricula in schools as championed by the Alliance for Childhood and the Waldorf Schools, the protection of school recesses as led by Playworks, the fight against childhood obesity led by First Lady Michelle Obama's Let’s Move compaign, and the movement for playgrounds near all children as envisioned by KaBOOM!8