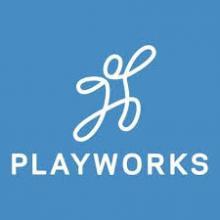 Playworks is a national, nonprofit organization that bolsters learning by providing safe, healthy, and inclusive play opportunities for school children to transform children’s social and emotional health. Playworks partners with elementary schools, districts, and afterschool programs to integrate games into recess to encourage every child on the playground to be included.1

Research has shown that play is essential to child development, and quality recess and playtime helps them return to the classroom more focused and ready to learn. Playworks sends trained, full-time coaches to low-income schools to turn recess and playtime into a positive learning opportunity.2 These coaches provide play and physical activity through these components of the Playworks program:

Founded by Jill Vialet under the name Sport4Kids in 1996, the name was changed to Playworks in July 2009.4 The idea for starting the organization came while Jill was waiting to meet with a principal of an elementary school, who was occupied with three boys who had gotten into trouble at recess. The program’s goal was to provide a solution for educators who were frustrated by the consistent problems that occurred during recess and were carried into the classroom. The first year they worked with two schools, and in 2005, the organization was awarded a $4.4 million grant from the Robert Wood Johnson Foundation, followed by an additional $18.7 million investment, which supported their expansion.5

By 2011, Playworks had trained, full-time program coaches at 250 low-income urban schools in 15 cities. Some of their early achievements included sending more than 30 staff members to Houston, Texas, to provide children displaced by Hurricane Katrina with the chance to play. In 2009, Playworks hosted PLAY ON, a national conference on play in San Francisco, California. Playworks coaches and staff also led games at the annual White House Easter Egg Roll for the first time in 2009. Playworks was also invited to become part of Michelle Obama’s Let’s Move initiative in 2010.6

In 2010, Playworks partnered with California’s Stockton Unified School District in a district-wide initiative to train campus security assistants (CSAs) at all of their 43 public K-8 schools. In six months, the CSAs received 25 hours of professional development training and coaching skills. The objective was to create a systematic approach for how students move throughout the school day, including recess, where it was found that most conflicts occur and was most likely to spill over into the classroom. When the chaos from the playground was removed with Playworks’ coaching techniques, performance and test scores rose significantly. One positive and unforeseen impact was that as the CSAs became proactive and engaged the kids in games and physical activity, the students viewed them as role models instead of as the police.7

Over the years Playworks grew to serve more schools in 23 major cities across the United States.8 By 2018, Playworks had expanded to nearly 700 employees in 23 offices around the country. They reached 1.25 million children at 2,500 elementary schools that year, the majority from low-income families and neighborhoods.9