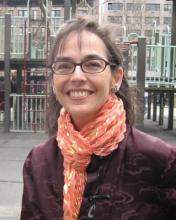 New York City-based Lenore Skenazy is a syndicated columnist constantly examining the curious realities of daily life, from S.A.T.-prep shower curtains for students to pricey bottled water for dogs. In her weekly writings she runs humor contests, hosts public forums, and weighs in on topics both crucial and quirky.

“Free-Range Kids” is a phrase and a movement Lenore created and promoted through a blog, a book, speaking engagements, and, most recently, a reality television show airing on Discovery/TLC International. She has become a voice to “start renormalizing childhood” and to realize that “Kids are competent, kids are capable. Kids deserve freedom, responsibility, and a chance to be part of the world.”1

After earning a Bachelor of Arts degree in American Studies from Yale University in 1981, Lenore completed a Masters in Journalism from Columbia University. She then began writing as a pop culture reporter and created a weekly humor contest for both the print and on-air media.

Starting in 1992 she became a National Public Radio (NPR) commentator on All Things Considered, a role she filled for ten years. During this time she joined the staff of the New York Daily News and was featured on the Food Channel. For 14 years, Lenore was a feature writer for the Daily News, covering, at different times, food, entertainment, restaurant reviews and “New York Stories” about life in the big city. In 2000, the New York Newswomen's Club voted Lenore New York's best columnist.

Lenore eventually settled into being an op-ed columnist at the Daily News, a position she held for six years until December 2006. The year before, she had begun syndicating her column through Creators Syndicate. It now appears in more than 50 newspapers. After the Daily News, in 2007 she became a columnist for The New York Sun.2

In April of 2008, Lenore's professional writing took a new path when she and her husband allowed their 9 year old son to travel the subway home alone. She wrote about the event, “Why I Let My 9-Year-Old Take the Subway Alone,” in a column for The New York Sun and then became the center of a media storm. Labeled “America's Worst Mom,” Lenore appeared on numerous talk shows from Dr. Phil to The Today Show to The View, to defend herself. As the storm thickened, she created the Free-Range Kids blog to further respond and to support parents who were also allowing their children to “range free” and safely explore their world independently.

Believing that “everything has its 15 minutes of fear,”3 Lenore maintains that the constant stream of television sensationalism has made it “impossible for people to calculate the difference between real and remote risks.”4 Well-intentioned parents become convinced that their children are helpless, and they begin to treat them as if they are handicapped and cannot take care of themselves. With statistics to quantify any real risks, Lenore maintains that “Our kids are safer than we think, and more competent, too. They deserve a chance to stretch and grow and do what we did – stay out till the street lights come on.”5

Lenore goes one step further; she maintains that “Confident kids who feel at home in the world are SAFER than coddled kids who have been taught they are dainty prey without mom or dad by their side.”6 Acknowledging that “helicopter parents” who “hover” close to their children to protect them from anything bad do, of course, want the best for their children, Lenore gives tips for letting go of the fears and allowing the children more freedom to explore and grow confident in their abilities. In 2010, these beliefs, facts, discussion of fears, suggestions, and Free-Range Commandments were published in the book, Free-Range Kids, which has been translated into six languages. She has also taken this message to the world through lecture engagements and through a reality television show in which she helps overprotective parents relax their fears.7

Beyond the Free Range Kids movement, Lenore co-authored with Carol Boswell a trivia book in 2009 entitled, Who's the Blonde that Married What's-His-Name? The Tip-of-the-Tongue Test of Everything You Know You Know … But Can't Remember Right Now. She also continues to be “New York's Contest Queen”8 as the humor contest editor for The Week.