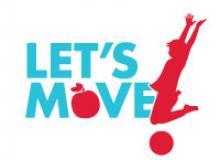 Let’s Move! is a campaign by First Lady Michelle Obama dedicated to solving the problem of childhood obesity within a generation. Mrs. Obama began a national discussion about the health and nutrition of America’s children when she broke ground on the White House Kitchen Garden with local elementary school students. Further conversations on the subject grew into the Let’s Move! initiative that was launched February 9, 2010, at the White House.1

To support the initiative, President Barack Obama signed a Presidential memorandum creating the first-ever Task Force on Childhood Obesity. The Task Force conducts a review of all programs and policies relating to child nutrition and physical activity. They develop a national action plan to maximize federal resources and set standards towards reaching the First Lady’s goal.2

The Task Force recommendations focus on five major areas of the initiative:3

Combining these strategies, Let’s Move! strives to put children on a path to a healthy future from their earliest months and years. Educating parents and providing healthier foods in schools along with encouraging children to be more physically active are the keys to the success of the program.4

There are now several programs in place under the Let’s Move! initiative. Let’s Move Cities and Towns engages communities by focusing on their ability to solve the obesity challenge on a local level. Chefs Move to Schools matches chefs with school districts to help schools improve health and nutrition. Let’s Move Outside! was created to get parents and children to take advantage of the great outdoors. Let’s Move in the Clinic shows how health care providers can have a direct impact on a child’s health.5