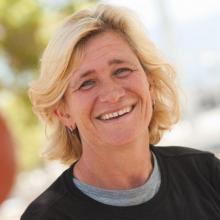 As a social entrepreneur, Jill Vialet co-founded the Museum of Children's Art (MOCHA) in Oakland, California and, more recently, founded Playworks, a recess and after school physical activity program. With the conviction that “play is a precious commodity,”1 she declares, “When recess is bad, it infects the entire school day. But a vibrant recess is like grease for a school's gears. It makes everything else go more smoothly.”2

Jill grew up active in sports and play activities, which often included the more traditional sports usually reserved for boys. Early on she was guided by Coach Clarence, a local playground recreational worker, who assisted her in being involved in these sports.3 Encouraged, her interest continued to where in high school she was a state champion in track, in college she played basketball and rugby and coached soccer,4 and presently she enjoys running and mountain biking.5

At Harvard, Jill studied medical sociology, was student body president, co-founded Students Against Racism,6 and, as a senior, was Director of Harvard's Public Service Program in 1986.7 While in college Jill spent a summer in Peru with the Amigos de las Americas organization, and after graduation she worked in Alaska for Campfire Boys and Girls, where she created programs to teach art and survival swimming skills to children ages 2-17.

While directing Project Yes, in 1988, Jill co-founded the Museum of Children's Art (MOCHA), an organization dedicated to helping families and communities celebrate the art and creativity of their children. As Executive Director, Jill developed an “artists in residency” program in the schools and brought artists to work with children in pediatric wards of hospitals.8 After nine years, Jill retired as Executive Director and became a board member emeritus.9

While working in the schools with MOCHA, Jill was approached by an elementary school principal to solve her problem with escalating schoolyard conflicts. Thinking back to her experience with Coach Clarence, she modified the successful MOCHA model to physical health issues and formulated a plan to “transform recess and the school day with safe and healthy play so teachers can teach and kids can learn.”10 With this plan, Jill founded Sports4Kids in two schools in Berkeley, California in 1996.11

Sports4Kids was renamed Playworks in 2009, and operates as a nonprofit elementary education program. Playworks has the vision that one day, every child can play every day. The organization brings play and physical activity to low-income schools in urban areas. The program stops the chaos on school playgrounds and addresses the increasing bullying and violence in unsupervised school play spaces, the emphasis on competitive school sports which often excludes girls and less adept children, and the tension between the need to achieve academically and the need for physical activity.12

With trained full-time adults, known as “coaches” to the students, Jill has established a structure of onsite coaches and student Junior Coaches to organize lunchtime and recess activities; to include regular class game time; to provide before or after school programs with homework help, snacks, and organized sports and games; and to offer interscholastic sports leagues. For local school staffs and community volunteers, Playworks also offers customized training on such topics as organized games and activities, group management, in-class physical activities, violence prevention, and conflict resolution. Whether through coaches or local trained educators, they “create an environment which fosters sportsmanship, health and fitness awareness, focus, and fun.”13

Jill maintains that an effective recess puts the children into “the play state” which releases endorphins, resulting in happy and energetic students who are “more likely to engage and participate in the classroom.”14 Additionally, the program has found that students are less likely to be chronically absent, discipline and suspension rates decrease, students feel more engaged and in control, and teachers regain classroom time for academic pursuits.15

Over the years Playworks grew to serve more schools in 23 major cities across the United States.16 Playworks has been included in First Lady Michelle Obama's Let’s Move! Initiative, studied by researchers, and spotlighted on television and in newspapers.17 By 2018, Playworks had expanded to nearly 700 employees in 23 offices around the country. They reached 1.25 million children at 2,500 elementary schools that year, the majority from low-income families and neighborhoods.18

For her achievements, Jill received Radcliffe's Jane Rainie Opel Award for achievement by a young alumna in 1996.19 She was elected as a Eureka Fellow from 2000-2001, an Ashoka Fellow in 2004, and honored as a social innovator at the Clinton Global Initiative in 2009.20 For “creating innovative, new solutions to a host of old problems” Jill was included on the 2011 Forbes' List of Top 30 Social Entrepreneurs.21 She is also on the advisory board for the University of California Berkeley's Principal Leadership Institute.22