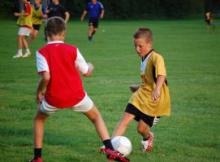 Soccer is a simple team sport that is enjoyed by children as young as three years of age. The game is an inclusive activity that involves children of varying shapes and size, since the physical size of the players is not an important factor in their success as players. Soccer requires the ability to run up and down the playing field while the game is in play, which is a good aerobic exercise that builds stamina.1

For thousands of years, early cultures from around the world have enjoyed a sport that included kicking a ball with the feet. From as early as 1697 B.C., the Chinese had a game described as kicking a ball through goal posts without the use of hands.2 Early descriptions of a similar game in Japan also included attempting to pass the ball without allowing it to touch the ground. The ancient Greeks and Romans played games on rectangular fields with opposing teams. Early Olympic games included a Roman game called Harpastum, which consisted of 27 players on each side, who played so enthusiastically that nearly two-thirds of them were hospitalized after a fifty-minute game.

Early soccer games in medieval England were extremely popular where they were played between villages and became more of a “mob” game. With no written rules, the games were played through the streets, fields, and streams where almost anything was allowed. These games often became violent and unruly, and were condemned by rulers in the 14th through 16th centuries, with laws passed to threaten imprisonment for playing soccer.3

Boys were introduced to the game of soccer in English schools in the 1700s as a means of physical fitness. Although the game was organized, rules varied from school to school. By the 1860s a soccer enthusiast, Cobb Morley, suggested the creation of a governing body for soccer, and on October 26, 1863, founding members of several soccer clubs around London met to form the basis for the organization called the Football Association. Cobb drew up a set of rules for the game, which are still the foundation of the game of soccer.4

Still called football in most countries, the name “soccer” is believed to have been a slang word used to shorten the word “association” to distinguish the game from rugby, called by the slang word “ruggers.” Rugby was similar to soccer but allowed for more rugged play and the handling of the ball.5

The game quickly spread throughout the world, mainly due to the British influence. In the United States, the modern game was largely introduced by immigrants and played by working-class communities. American football and baseball were more popular as team sports, but early Olympic games in the 1900s helped spread soccer’s popularity.6 Today soccer is widely played throughout America by children in youth leagues and school teams, and is the most popular game played throughout the world.

The game of soccer is played with a soccer ball, which has an inner bladder made from natural or synthetic rubber and an exterior covering of synthetic leather.7 The game is played on a rectangular field, which is usually 110-120 yards in length and 70-80 yards in width, but a smaller field can be used based on the ages and sizes of the players. The two teams generally each have eleven players with one goalie and ten field players, although this varies with younger players’ teams. The game has a time limit with two halves and a half time break, with children’s games ranging from 15-30 minute halves and a 7-10 minute break. The object of the game is to make the most points by kicking the ball through the opponent’s goal in the time allotted.8

The game is started after a coin toss to determine which team has the first kickoff from the center of the field. One of the most basic rules of moving the ball involves the illegal use of the hands. The ball cannot be controlled by the hands or arms intentionally by the field players. The goalie may use his hands to deflect shots or passes by the opposing team, but cannot pass the ball to his own teammate using his hands.9

Soccer players move the ball down the field by dribbling the ball with a back and forth motion between their feet. They attempt to defend their control of the ball by moving their body positions to block their opponents, who attempt to take control of the ball. Team members pass the ball to each other as they work to advance the ball close enough to take a shot at the goal by kicking it beyond the goal line inside the goal enclosure.10

Soccer games are officiated by a referee and two linesmen or sideline judges. They determine when a ball is kicked out of bounds, when a foul has been committed, and when a goal has been scored. Fouls are given for illegal use of the hands and for rough play involving pushing, grabbing, or kicking an opponent.11

The game of soccer offers many benefits for child development. The amount of running required to play the game aids in fitness and builds endurance. The skills used to maneuver the ball with the feet develop agility and coordination. As with all team sports, soccer requires cooperation of the team members and can help children improve their self-confidence and social skills.12