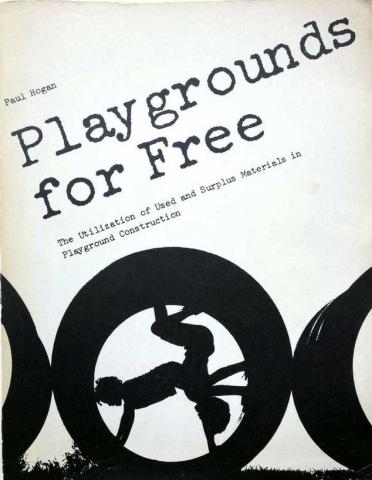 Playgrounds for Free: The Utilization of Used and Surplus Materials in Playground Construction was written by Paul Hogan and published by The MIT Press in 1974. The book details the potential of using “junk” materials and involving the community to build playgrounds.1

Since the 1960s, the author was involved with the playground industry, beginning with inner city Philadelphia, where he worked with community leaders and youth groups to build playgrounds on vacant and abandoned lots as Director of Construction for the Neighborhood Renewal Corps. From his experiences, Paul authored numerous articles for newspapers, journals, and magazines. Playgrounds for Free became his first published book in 1974, and he also wrote The Nuts & Bolts of Playground Construction in 1984.2

Part 1 – Materials suggests basic used and surplus materials that can be obtained for building playgrounds. Cable reels, empty tanks and oil drums, chipped concrete pipe, utility poles, old railroad ties, discarded tires, inner tubes, and other used materials such as boxes, shipping crates, and old boats and other vehicles are described as potential materials. Frequently these materials are a disposal problem for the owners of these items and can often be obtained for free as a tax write-off for the owners.

Part 2 – Using the Materials offers photographs and sketches outlining possible uses of the materials obtained. Swings made from tires and other materials as well as cableways are described in detail. Suggestions for animals made from concrete, fiberglass, wood, utility poles, tires, and old oil drums are given to spark imagination. Constructed play structures made from used lumber, old tires, and rope are shown. This section also discusses landscaping elements that can be built from discarded materials. Ideas for tree houses, shanties, and other shelters are also given.

Part 3 – How to Do It, How Not to Do It discusses the successes and failures the author experienced in building community playgrounds. He learned that for playgrounds to be successfully utilized they must have the support of the community. From his experiences he discovered that the best playgrounds are “people’s parks” – play places built and maintained by the people of the community. When community members including the children are involved in designing and building the playground, they are more apt to use and maintain the playground.

The author was a strong proponent for adventure playgrounds and cited the work of Lady Allen of Hurtwood, Robin Moore, and others in the adventure playground movement. Their successes and failures are discussed. Temporary or part-time playgrounds erected on company parking lots afterhours or in blocked off streets are another way to offer playtime for children, especially in inner city areas where recreational opportunities are lacking.

The book describes in detail the Rokugo Tire Park in Tokyo, Japan. Using more than 3,500 used tires donated by the Rokugo Tire Company, the park contains swings, a giant slide, and climbing features made of tires with a large tire dragon nearly 20 feet tall as a center attraction. Loose tires are also available for the children to engage in constructive play on their own. Nearby the Traffic Park and the Maritime Park contain large used vehicles for children to climb on and use in their pretend play.

The book gives suggestions for soliciting help from corporations to donate materials, surplus land, and the services of skilled workers using their equipment to build playgrounds. A sample letter of solicitation, a sample press release, and a list of some things that can be obtained from utility companies, from local, state and federal governments, and from private companies are given.

Nursery playgrounds and playgrounds for children with special needs using discarded materials are also included in the book.3