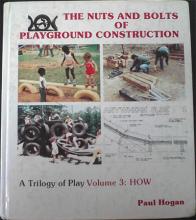 The Nuts and Bolts of Playground Construction, written by Paul Hogan, is Volume 3 of A Trilogy of Play and focuses mainly on the “how” of creating play spaces. Published in 1982, Nuts and Bolts completed the discussion of playgrounds that began with Eva Noren-Bjorn in Volume 1 about “why” to have playgrounds and continued with John Mason in Volume 2 about “where” to have them.1 Written largely as a “how to” book complete with diagrams, designs, and copious pictures, Paul also spotlighted nations where play is honored and included articles that highlight his philosophy of play.

Paul offered a simple definition of a playground: “A playground is a nice place that children like to come to in their free time.”2 He fondly recounted the large empty block in his childhood neighborhood that children and adults used for recreation year round. This same block was later improved by the city to be an official, fenced-in playground which no one used. This experience underscored Paul's philosophy of providing adventure playgrounds that ideally the children create themselves.

Through playground creation Paul reasoned that children, like adults, are allowed the right and responsibility to create their own environment. They become “a worthwhile and valuable member of society – not just a consumer statistic for record or toy manufacturers.”3 He declared, “One of the biggest problems in the Western world is that we do not give children any responsibility.” In Nuts and Bolts Paul quoted Rowena Wilkinson's summary, “If we take work, play and responsibility away from children, we take their respect. If we take their respect, they cannot contribute to society.”4

While spotlighting Sweden, Paul quoted Eva Insulander who maintains that “we have too narrow an understanding about the importance of play for children.” She counsels that “If you want to find out what children can really do, you must stop giving them things.”5 Throughout Nuts and Bolts, Paul emphasized involving children. In fact, he believed that the playground is a tool to get children involved and that once they build a playground, it should be torn down so another playground project can be started.6

The bulk of The Nuts and Bolts of Playground Construction involves the possibilities of play features created from bridges, cable reels, cargo nets, tires, poles, swings, tree houses, vehicles, boats, buses, and sculptures. Through photographs, schematics, drawings, and construction tips, Paul brought a wealth of ideas for communities to build playgrounds together.