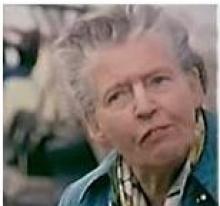 Lady Allen of Hurtwood (1897-1976) was an avid advocate for children’s rights and welfare throughout her lifetime and was principally responsible for introducing the concept of adventure playgrounds and planning for children’s play from their point of view. Her numerous books and pamphlets influenced public thought and brought about much change for children’s welfare in the United Kingdom and throughout the world.1

Marjory Gill grew up in the country in the county of Kent, England, in a large, loving family. Her many memories of the happy times they enjoyed together with the freedom to roam and play together influenced her desire in later years to give children the same opportunities she had enjoyed as a child to play freely and have a happy life.2

Marjory furthered her education at Bedales School and studied horticulture at Reading University becoming a landscape architect. Her brother Colin, an artist studying in London, invited her to London often to meet his artistic and socialite friends. She made friends easily with influential people, a gift which enabled her throughout her life to gain significant support in her many important causes.

She began to be hired to design gardens professionally and her love of gardening encouraged her to accept Colin’s invitation to visit him in Rome in 1921 to explore the beautiful gardens there. While there she met Clifford Allen (known as C.A.), an influential member of the International Labour Party, who was in Italy convalescing following an illness. They soon married and had one daughter, Polly.

Clifford was a pacificist and a socialist, who during World War I had been imprisoned for refusing to be conscripted for any role in the armed services. He contracted tuberculosis while in prison, which weakened him for the rest of his life. He was named Lord Allen of Hurtwood in 1931 and died in a sanatorium in 1939.

Marjory, now Lady Allen of Hurtwood, continued her work in gardening. She helped establish the Institute of Landscape Architects with the aim to further the recognition of the profession and develop the training in the field.3

During World War II Lady Allen became involved with the children who were displaced and orphaned. She became the chair of the British Nursery Association from 1942 through 1951. Promoting the idea of building low cost, high-quality nurseries throughout the United Kingdom to care for children, she had toys and furniture built for them from damaged wood from bombsites by auxiliary fireman as they waited between bombing raids. Discovering the appalling conditions of orphaned children kept in unregulated state facilities, Lady Allen wrote a letter describing the harsh and indifferent treatment of children to The Times. The letter drew a huge response that resulted in the passing of the Children Act of 1948, which bettered the conditions and care of children.

Lady Allen worked with others to create OMEP: The World Organization for Early Childhood Education, which worked to improve the lives of young children. OMEP was supported by UNESCO, who helped Lady Allen draft the first constitution of OMEP. Lady Allen also worked with UNICEF and other international organizations to help the children who were orphaned or made homeless from the war.4

During her travels campaigning on behalf of displaced children, Lady Allen was shown a new play space in Copenhagen. A Danish landscape architect, C. Th. Sorenson, had recognized that children enjoyed playing with loose parts, such as sticks, stones, boxes, ropes, and other open-ended play materials, more than the traditional playgrounds he had previously designed. He built a new playground in Emdrup, Denmark, in 1943, that he referred to as a “junk playground,” a place where children could create and build whatever their imagination allowed.5 Lady Allen later wrote, “I was completely swept off my feet by my first visit to Emdrup playground. In a flash of understanding I realized that I was looking at something quite new and full of possibilities. There was a wealth of waste material on it and no man-made fixtures. The children could dig, build houses, experiment with sand, water or fire and play games of adventure and make believe.” This led her to campaign for what she renamed as “adventure playgrounds” to be created on the World War II bombsites in the United Kingdom.

Lady Allen became aware of the restrictions placed on children with disabilities, who were not able to play in existing playgrounds. After studying the needs of these children, she eventually was able to open a new adventure playground designed specifically for children with disabilities. Subsequently many other inclusive play adventure playgrounds have been developed by the Handicapped Adventure Playground Association, which Lady Allen helped establish.6 She was also a founding member of the International Play Association.7

Lady Allen became concerned about young children under the age of 5 living in high rise apartments who had no place to play. This prompted her to write several pamphlets, Design for Play (1961) and New Playgrounds (1965), and a book called Planning for Play (1968), where she offered design guidelines for play space based on the playwork theory. These concepts could be applied to areas called liminal spaces or what architects refer to as SLOAP, spaces left over after planning. Aldo van Eyck had similarly used small areas throughout the urban setting to develop playgrounds. Two essays by landscape architect Robin Moore were included in Planning for Play describing the social impact and sensitivity to children’s needs that must be considered when building playgrounds.8

In 1965, Lady Allen toured the east coast of the United States bringing the adventure playground concept to America. After touring many showpiece playgrounds, she called them “an administrator’s heaven and a child’s hell.” She went on to state, “It is time we decide whether our playgrounds are to be designed for adults, who love to be neat, or for children, who love to be dirty.” Her response to the concerns about the possible dangers of adventure playgrounds, she replied, “it is better to risk a broken leg than a broken spirit. A leg can always mend. A spirit may not.”9