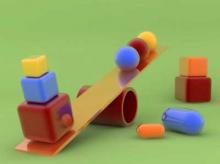 Loose parts are objects and materials that children can move, manipulate, control, and change within their play. With endless possibilities of play, they provide a high level of creativity and choice and develop children’s imagination. Children often prefer playing with boxes, sticks, rocks, water, sand, and ropes that can be manipulated in whatever way they choose over traditional toys that have limited flexibility and play value. It has often been observed that children presented with a gift will play longer with the box than with the toy that was in it.1

Loose parts encourage open-ended play and are found in many environments. When children are involved with nature play, they use what is available, such as water, dirt, sand, sticks, leaves, pinecones, rocks, and feathers to create whatever they imagine. Nature provides abundant materials for play when at the beach or in the woods. Loose parts on the playground can include balls, hoops, jump ropes, buckets, and other containers. Indoors children can be found playing with blocks, dress up play props, blankets, and art materials. In any environment, anything loose can potentially be a play object.2

Early proponents for loose parts in playgrounds for children were Carl Theodor Sorensen, a Dutch landscape architect, who developed the concept of junk playgrounds, where children could use leftover construction materials to build their own playgrounds, and Lady Allen of Hurtwood, who expanded his ideas and introduced adventure playgrounds to the United Kingdom and around the world. Simon Nicholson is credited for developing the theory of loose parts in an article he wrote published in Landscape Architect in October 1971 entitled, “How not to cheat children: The Theory of Loose Parts.”3

The loose parts theory suggests that when children are given a wide range of materials that have no defined purpose, they will be more inventive in their play and have infinite play opportunities manipulating them in ever-changing ways that their imaginations devise. The more flexible the environment, the greater the level of creativity and inventiveness is expressed. Nicholson stated, “In any environment, both the degree of inventiveness and creativity, and the possibility of discovery, are directly proportional to the number and kind of variables in it.”4

There are many benefits for playing with loose parts. They promote a wide variety of play behaviors, including social play, dramatic play, constructive play, symbolic play, and even games with rules, when children make up their own games with the objects. Manipulating loose parts develops many learning skills, including problem solving, creativity, and making choices. Math and physical science concepts are learned as children experiment with sand, water, buckets, measuring cups, and stacking materials. Children of all ages can play with the same materials and use them in different ways appropriate for their age development.5