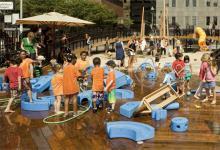 Imagination Playground, a company based in New York City, markets loose parts designed by David Rockwell that encourage child-directed, unstructured free play. David, a father of two small children and the CEO of the Rockwell Group architecture firm, began thinking of playground designs in 2004 after finishing some post 9/11 projects in lower Manhattan. Having just read Susan Solomon's American Playgrounds, Revitalizing Community Space and being influenced by Louis Kahn and Isamu Noguchi's playground design for Riverside Park, David was interested in designing a playground that would not only foster gross motor skills, but also facilitate creativity, stimulate mental development, and encourage collaboration between children.1

With support from New York City's Park Commissioner Adrian Benepe, David began the design process for a playground aided by advice from Susan Soloman and Roger Hart, the director of Children's Environments Research Group at the City University of New York.2 In 2007, David announced his figure eight design for the playground that involved the manipulative environments of sand, water, and sound as well as 350 blue foam building blocks he had developed. Trained play associates would oversee the loose parts and maintain a safe play space.3 This new concept for the innovative playground, called Imagination Playground, was planned for the Burling Slip in the South Street Seaport Historic District near the East River in Manhattan.4

Working pro bono, David originally planned to design a similar play space for each New York City borough.5 However, a more cost effective way to bring creative play through loose parts came with a phone call from Darell Hammond, the CEO and founder of KaBOOM!, a nonprofit builder of playgrounds.6 Darell suggested a portable version of the planned Imagination Playground's loose parts to enhance existing playgrounds.

With the mission to “inspire children's inherent ability to dream and create,”9 these portable sets of 90 loose parts have since spread to play spaces throughout the country.10 The giant blue blocks, mats, crates, fabric, and wagons are packaged in storage containers on wheels designed to store and transport the loose play parts.11

Imagination Playground, the playground that inspired these portable playground sets, was completed in July of 2010. According to Darell, the loose parts playground sets are “the start of a movement. When kids are the experts who design, tear down and rebuild their own scenarios, when there's no right or wrong way to play, it helps them deal with everything that happens in their worlds, and it builds a foundation for healthy, active lives.”12