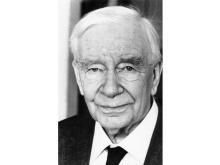 Carl Theodor Sorensen is considered one of the greatest landscape architects of the 20th century. He is best known for creating the first adventure playground along with schoolteacher Hans Dragehjelm in Emdrup, Denmark, a district of Copenhagen in 1940. He was also a prolific author, which included writing eight books, editing two volumes, and writing hundreds of articles. His writings covered open space in urban life, horticulture, garden art history, garden design principles, education, and his autobiography. All of his writings were in Danish, with only one book translated into English and another into German and Dutch.1

Born in 1893, Sorensen became a leader of the early modernists in landscape architecture. His vast understanding of garden history influenced his work to be a fusion of art, function, and tradition. Sorensen insisted that gardens are an art form, while making his designs available to the public as usable art. His forms of circles, squares, ovals, spirals, and free forms used in his designs allowed for great flexibility and functionality keeping people’s needs always at the center of his projects.2

Sorensen created a large body of work with more than two thousand projects that ranged from small gardens to large institutions and new residential developments. All of his projects were built in Denmark, and he defined his work as garden art. He designed humble suburban gardens as well as large estates for wealthy clients. The common elements in his designs included the woodland edge, the open field, the hedge, and the grove.

Sorensen developed his own approach to landscape architecture early in his career. He was motivated to create better living spaces for families and had a special interest in meeting the play and recreational needs of children, especially those living in urban settings. Early in his thinking Sorensen had begun to imagine what he called a junk playground, which he described in 1935 in the Danish journal, Arkitetkens Manedshaefte:

“Finally we should probably at some point experiment with what one could call a junk playground. I am thinking in terms of an area, not too small in size, well close off from its surroundings by thick greenery, where we should gather, for the amusement of bigger children, all sorts of old scrap that the children from the apartment blocks could be allowed to work with, as the children in the countryside and in the suburbs already have. There could be branches and waste from tree polling and bushes, old cardboard boxes, planks and boards, “dead” cars, old tyres and lots of other things, which would be a joy for healthy boys to use for something. Of course it would look terrible, and of course some kind of order would have to be maintained; but I believe that things would not need to go radically wrong with that sort of situation. If there were really a lot of space, one is tempted to imagine tiny little kindergartens, keeping hens and the like, but it would at all events require an interested adult supervisor…”

The Danes were influenced by Friedrich Froebel’s emphasis on natural play for children. In 1902 Hans Dragehjelm helped set up the Froebel Society in Denmark and introduced the sand box to Denmark in 1907. In 1937 he partnered with Sorensen to develop a proposal for the transformation of the Cottage Park in Klampenborg into a family and children’s park.

They suggested in their proposal that children should have an outlet for their natural urge to be children of nature even though their urban life usually did not allow for it. Dragehjelm and Sorensen took the idea of children in nature a step farther by suggesting that children needed play equipment from natural materials that would appeal to their creativity, such as trees for climbing and sand boxes. They pointed out that children need and want to build dens, climb, fight, and hunt. Their views were supported by the leading educationalists and psychologists of the day who felt nature was healthy and useful for child development, however, their proposal for the playground was rejected.4

Designers at this time inclined toward functionalism and sought to constitute the design of the playground upon the analysis of children’s play activity. Since the modernist landscape architect desired to make play environments “imaginative,” then it followed that the “imagination” at play should be that of the child, and not of the architect.5

The first truly junk playground was born during German occupation of the country in the early 1940s. At some point Sorensen observed children playing on bombed war sites using construction tools and the surrounding materials to build their own playground. His observation had a profound effect on him, and he realized that his position as an architect who held the power and control regarding what play opportunities were made to children should give way to being a facilitator who passed the power and control to children in order that they themselves could create their own play environments. On August 15, 1943, Emdrup opened as a junk playground for a large housing project, which initially saw as many as 900 children attending each day, eventually leveling out to between 200-400 children per day. Their play materials were neither static nor expensive. An assortment of things were included in the junk playground such as wood, rope, canvas, tires, wire, bricks, pipes, rocks, nets, logs, balls, abandoned furniture, wheels, and vehicles.6

Sorensen’s original design for the junk playground employed abstract and symbolic forms that represented the basic elements of the Danish rural landscape – the beach, the meadow, and the grove. However, the use of junk as desirable play material created an anti-aesthetic result, and the children’s activities did not correspond with an artistic view of the playground as a landscape. Sorensen came to realize that though he felt the junk playgrounds he devised were the ugliest contributions he had made, he realized that they were the most beautiful and best of his works.

John Bertelsen was Emdrup’s first play leader. He stressed a hands-off approach that allowed the children to direct their own building activity toward a useful goal that they directed themselves. He felt that this approach offered an opportunity to gain insight into the minds of the children and their conflicts while allowing them to develop self-responsibility and promote social skills such as resolving conflicts peacefully themselves.7

Believing the primary role of a play leader is to facilitate a safe, happy play experience for each child while interfering as little as possible, Sorensen expressed that too much supervision or imposed structure was counterproductive. He wrote in 1947, “It is my opinion that children ought to be free by themselves to the greatest possible extent. A certain supervision and guidance will of course be necessary, but I am firmly convinced that one ought to be exceedingly careful when interfering in the lives and activities of children.”8

The advancement of junk playgrounds is credited to Lady Allen of Hurtwood, who observed the Emdrup playground while visiting Copenhagen. She brought the concept to Britain and renamed her playgrounds “adventure playgrounds.”9

Sorensen’s influence in landscape design went beyond his many projects. Along with being a prolific author, he had a long career in teaching as well. Sorensen began teaching at the Royal Danish Academy of Fine Arts in Copenhagen in 1940. He was professor of landscape architecture from 1954 to 1963. He was awarded the Eckersberg Medal in 1945 and the Prince Eugen Medal in 1972.10 Sorensen retired from his professorship in 1963 and died in 1979.11