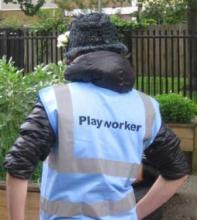 Playwork is the support given by adults in an unobtrusive way of children’s open-ended, creative free play. During a play session, Playworkers are available to assist a child if needed, but strive to be as inconspicuous as possible to allow the children to direct their own play. Playworkers promote an adventuresome place for them to play, while keeping a watchful eye on them for their safety.1

Playwork has its origins in Europe, when during and after World War II, children were observed playing in the rubble of bombed out areas climbing in the debris and building forts and play things out of scrap lumber and other salvaged materials. Lady Allen of Hurtwood was influenced by a Danish landscape architect, C. Th. Sorenson, who had recognized that children enjoyed playing with loose parts, such as sticks, stones, boxes, ropes, and other open-ended play materials, more than the traditional playgrounds he had previously designed. He built a new playground in Emdrup, Denmark, in 1943, that he referred to as a “junk playground,” a place where children could create and build whatever their imagination allowed. Lady Allen brought this playground concept to England and renamed them “adventure playgrounds.”2

The first adventure playgrounds were staffed by workers called “wardens.” Their primary job was to unlock the tool sheds at the playgrounds that held the building materials for the children to play with each day. As the workers observed the children at play, they became real advocates for play and facilitated the play processes with more materials. Soon they became known as “play leaders” and then “playworkers,” however, they were careful to not lead the play activities, but assist children where needed.3

These adventure playgrounds contain handmade climbing structures created by the children and playworkers, forts, dress up clothes, sand, water, and an ever-changing variety of loose parts for children to manipulate and use to create their own structures and play things. While looking “quirky” to most adults, this child-created play area is dedicated to the children and their play, and it becomes whatever they make it.4 Since most of these playgrounds are in cities, this allows urban play to be more like playing in the country. If children don’t have trees to climb on, they build climbing structures. The adventure playground allows for calculated risk and psychological safety.5 Lady Allen stated “better a broken arm than a broken spirit.”6

Much research and study has been done on this new concept. Prior to this, play had been studied as education or therapy, but not as play itself. Playwork has become a respected profession in the United Kingdom. Playworkers are well trained and can earn vocational certificates as well as diplomas in Playwork at the bachelor’s, master’s, and doctoral levels. They often work with regional and national play associations to help develop play policies.7

The Playwork Principles that describe the unique perspectives of play and playwork resulted from a document written by Bob Hughes, Gordon Sturrock, and Mick Conway, all who had studied playwork. Their initial document was condensed and reworked by a scrutiny group after receiving comments from the playwork sector throughout the United Kingdom.8 These principles, taken as a whole, give the professional and ethical framework for playworkers, guiding their approach for working with children. The Playwork Principles are:

Playworkers believe that children need to be able to play freely without adult intervention. Children of all ages and all abilities can engage in inclusive play together with the children overcoming their limitations in their own time and way. Children learn to negotiate their own problems, and risk taking is allowed. Playworkers are available to step in when needed, but they primarily spend their time observing the play looking for any adjustments that might be needed in the play space. Called a play audit, playworkers meet together after the children’s play time to share observations and make changes for future play.10