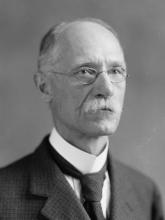 Joseph Lee began life in 1862 as the son of a wealthy Boston family, and through a lifetime of leadership, research, writings, and philanthropy, he became known as the “Father of the Playground Movement.” Concerning a child's need for play he believed: “There must be creation, song, wonder, inquiry, and adventure. If these are slighted we shall have committed once again the ancient crime against childhood, of which practically all education has been guilty – the crime of not letting the child live as well as learn.”1

After a childhood of many recreational play opportunities typical of wealthy families, Lee graduated from Harvard with a bachelor’s degree in 1883 and a law degree in 1887. With his family's wealth he focused not on being a lawyer but on making social changes to improve his community and nation. One of his first involvements was a survey for the Family Welfare Society of Boston in which he studied possible play environments in congested neighborhoods.

With an awareness of the play situations of these neighborhoods, Lee was later shocked to learn of boys being arrested for playing in the streets. Creating a solution, he cleared an empty lot and provided materials and game equipment for the children, only to find that unless they were supervised they fought with each other instead of playing with each other. Over several years, this play yard became his research center for observing the children and their play habits.

From his observations, Lee assisted in creating the Columbus Avenue model playground in 1898. It included a corner for small children, a boys' play area, individual garden spaces, a sports field, and indoor activities, such as basketball, bowling, and club meetings. There were two recreational leaders employed at Lee's expense to supervise. This playground was a success and further encouraged the playground movement. Lee also began speaking at events and conferences concerning playgrounds and recreation.

Four years after the establishment of the Columbus Avenue Playground and drawing on a decade of experiences as a social reformer, Lee authored his first book, Constructive and Preventive Philanthropy in 1902. While the title sounds like a general guidebook concerning societal improvements, it actually included detailed instructions on creating playgrounds, baths, gymnasiums, athletic centers, and skating rinks. These recreational areas were seen as a way to prevent delinquency and eliminate slums.

Though Lee was absent from the PAA founding meeting, he was elected as Vice-President along with Jane Addams, who was also absent. Both Lee and Addams were well known for their social reforms and their support of the playground movement. Their inclusion, as well as the election of President Theodore Roosevelt as honorary President and Jacob Riis as honorary Vice-President, gave the PAA positive press coverage.3

Previously in 1897, Lee founded and began serving as president of the Massachusetts Civic League, a position he would hold for 40 years.4 The Civic League sponsored legislation that protected and improved the public's welfare with a special emphasis on children's issues. Being comfortable with the law, Lee felt this approach was the most effective way to effect change. The Civic League saw about 100 laws passed which they supported and the defeat of about 50 laws which they opposed.

One key legislation that was passed in Massachusetts in 1908 was the requirement of cities of 10,000 people or more to establish playgrounds if the citizens so voted.5 This law set a precedence that led to similar laws in other states, which in turn assisted in the establishment of playgrounds throughout America. Other legislation that Lee and the Civic League fought for was the legalizing of playing games on Sunday, the opening of school property to adult usage, the establishment of a juvenile court system, and the liberalization of the parole system.

In 1908, as Lee saw the passage of the Massachusetts playground bill, he was named the chairman of the Playground Association of America's Committee on State Laws, and he published the booklet Play and Playgrounds. He considered play “...not simply something that a child likes to have; it is something that he must have if he is ever to grow up. It is more than an essential part of education; it is an essential part of the law of growth, of the process by which he becomes a man at all...”6 This booklet covered not only his philosophy of play, but the types of play for various ages, the importance of variety in play, the necessity of leadership and supervision, and the character values that come from play.

Lee's involvement with Playground Association of America continued to grow. In 1909, he was elected to be First Vice-President with Dr. Curtis as Second Vice-President. He was also on various PAA committees, including the committee on the Normal Course in Play and the committee to revise the PAA Constitution. And, as Dr. Gulick retired in 1910, Lee was elected to be President, a position he held until his death in 1937.

Lee guided the PAA as it evolved first to be the Playground and Recreation Association of America in the mid-1910s and then to be the National Recreation Association in 1930. He saw the Normal Course in Play, a curriculum for training recreation and playground directors, developed in 1909 and revised and published in 1925. Additionally, he saw the establishment of the National Recreation School, a one year course to train college graduates to be administrators for the new recreation departments being created.7 He also guided the Association's focus on quality long term growth, which built local leadership for sustainable recreation programs.

While Lee was involved with the national playground movement, he continued his interest in Boston's welfare by serving on the School Board for nine years, beginning in 1909. He initiated the medical inspection of students, a daily lunch program, and the multi-use of school buildings for the community. Among the other issues he supported were recreation opportunities for students, the merit system for selecting teachers, and teaching methods that adapt to the child's needs.

As a prolific writer, Lee published articles, letters to the editor, and books. Besides the two books already published on play, he also wrote How to Start a Playground in 1910, Play as an Antidote to Civilization in 1911, and Play for Home in 1912, from which he is credited with coining the phrase, “The family that plays together, stays together.”8 His best known book was Play in Education published in 1915, in which Lee took a middle ground concerning play facilitation. While he acknowledged the importance and seriousness of play, as seen from a child's point of view, he did not advocate totally unsupervised play. Nor did he advise strict organization of play and warned, “Do not be forever meddling, interfering, asking questions, showing them a better way. Give the constructive power of your children scope and elbow room – the temple that it builds is invisible to any eyes but theirs. If you blur and jostle their vision, it is lost.”9

During World War I, as President of the Playground and Recreation Association of America, Lee assisted in forming and then led the War Camp Community Service (WCCS) committee to provide off-duty recreation activities for servicemen. He was appointed to the Commissions on Training Camp Activities for both the War and Navy Departments, led fund raising drives, published poems to enroll the public in their work, and composed a WCCS budget song. For his service, Lee was honored with the War Department's Distinguished Service Medal. After the war, he continued to lead the Community Service of Boston, Inc., which was the successor of the WCCS.10

Beginning in 1918, Lee was on the Overseers' Committee at Harvard where he proposed and funded a school of education to train teachers. Again his interest in play surfaced when he brought a teacher of play and recreation, George E. Johnson, to the new school of education and personally paid his salary for the first five years.11

In 1937, at the age of 75, Lee died of pneumonia at his home in Cohasset, Massachusetts. For many years the National Recreation Association sponsored an annual national Joseph Lee Day to celebrate playgrounds and recreation. Additionally, the American Recreation Society also honored him with the Joseph Lee Memorial Contest which focuses on recreation developments.

A contemporary characterized Lee's work with schools, playgrounds, and recreation with these words: “Joseph Lee had constructive imagination. After he had backed his vision with money, persistence, and persuasion, the United States was no longer the same.”12