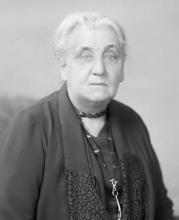 Who is Jane Addams?

Jane Addams was an early twentieth century reformer for better living conditions for the poor, equality and justice for oppressed populations, and world peace for all. Born into privilege she lived the majority of her life at Hull House in a German and Italian tenement neighborhood in Chicago, Illinois. One of the many reforms she championed was the basic human need for play. In 1909 she declared, “Only in the modern city have men concluded that it is no longer necessary for the municipality to provide for the insatiable desire for play. In so far as they have acted upon this conclusion, they have entered upon a most difficult and dangerous experiment...”1

Born on September 6, 1860 in Cedarville, Illinois, Jane was the daughter of John Huy Addams, a wealthy grist mill owner, a Civil War officer, a state senator, and a personal friend of the current president, Abraham Lincoln.2 Her mother died when she was two years old and her father remarried the following year. This marriage added two step-brothers to the family, one of which she would explore and play with in the caves, prairie, and forest near the mill. Her experience of unstructured and uninterrupted play in the country helped shape her efforts on behalf of immigrant children in the inner city of Chicago.3

In 1881, Jane was the valedictorian of her class at the Rockford Female Seminary. The following year, when the Seminary became accredited as the Rockford College for Women, she was granted a Bachelor of Arts degree.4 Born with a congenital spinal defect, Jane wanted to study medicine and enrolled in the Women's Medical College in Philadelphia, Pennsylvania. However, she soon withdrew due to ill health and family reservations about a career that could replace her prospects for marriage. Instead they took Jane and her friends on a twenty-one month tour of Europe.5

After Jane's return in 1885, her father died and she became depressed and ill. Her spinal difficulties were resolved with surgery and a year of recovery, after which she returned to Europe in 1887 with friends. While traveling with Ellen Gates Starr, they became acquainted with the founders of the Toynbee Hall, a university student-supported settlement house in the East End of London, England.

Utilizing what they learned at Toynbee Hall, Jane and Ellen rented a house in a German and Italian immigrant neighborhood of Chicago and opened Hull House on September 18, 1889. They began by living there and hosting readings and art slide presentations. As they came to know their neighbors, they realized that the mothers needed a place for their young children. Their solution was a kindergarten and a room for the mothers to be able to sit and talk. Other programs included a club for teenage boys, cooking and sewing lessons for young girls, lectures by university teachers and students, local culture nights, and a loaning library of art reproductions.

In 1890, college friend Julia Lathrop joined Jane and Ellen at Hull House. As a lay lawyer and organizer, Julia began to manage the day-to-day realities of Hull House, which freed up Jane to be more involved in the community. When Florence Kelley joined them in 1891, Hull House became a “centre of social reform.”6 Together they were dedicated to “providing a center for civic and social life, instituting and maintaining educational and philanthropic activities, and investigating and improving conditions in industrial areas of Chicago.”7

As their scope expanded so did the Hull House. Through the largesse of many donors and additional adjacent land from the owner, they added an art gallery in 1891, a “model playground” in 1892,8 a gymnasium, and a coffee house in 1893, a clubhouse in 1898, and a theater in 1899. By 1907, the Hull House involved thirteen buildings over a city block, which included the further additions of a swimming pool, bookbindery, art studio, music school, circulating library, employment bureau, labor museum, drama group, and a cooperative boarding club for girls.9

The Hull House playground was nearly an acre of open space, sand play areas, indoor gymnasium, swings, building blocks, and outdoor game areas. It also featured one of the early playground equipment pieces, a giant stride, which was a tall pole from which ropes were suspended from a revolving disk. The children would grip a rope and be able to take “great strides” around the pole.10 Because of Jane's growing notoriety, this new idea of a playground was widely publicized and thus assisted the growing playground movement.

When the Playground Association of America (PAA) was formed in 1907, Jane continued her support for playgrounds by serving as the second vice-president and speaking at their Play Congress.11 Another way Jane furthered the playground movement was through her book The Spirit of Youth and the City Streets, which was published in 1909. In her book she outlined the importance of recreation for shaping the development of morals in youth and declared, “Recreation is stronger than vice and recreation alone can stifle the lust for vice.”12

Jane felt that play and recreation should extend beyond the playground to include “marching musicians, public holidays, birthdays of heroes, the planting of trees, changing seasons, dances, public recreation, art, and play and games in their many forms.”13 With her and others' support, the PAA became influential in establishing playgrounds and recreation programs throughout America.

As Jane continued to live and work among the immigrants of Chicago she was shocked and “overpowered by the misery and narrow lives” of her neighbors. With Florence, she focused first on the factory conditions, and they were instrumental in the passing of the Illinois Factory Act in 1893. A decade later, in 1903, they joined others in forming the Women's Trade Union League, which angered some of their wealthy supporters.

Besides championing the plight of the poor, Jane also worked to recognize and protect the rights of other segments of American society. She was the vice-president of the National American Women's Suffrage Association in 1911, assisted in founding the National Association for the Advancement of Coloured People (NAACP) in 1909, and in response to the oppressive Palmer Raids joined in forming the American Civil Liberties Union (ACLU) in 1920.

As a leader of the American settlement movement, Jane's experiences and reflections on the Hull House social experiment were published in Twenty Years at Hull House: With Autobiographical Notes (1910). The following year she helped to establish the National Federation of Settlements. She felt that, “If you want to be surrounded by second rate ability, you will dominate your settlement. If you want the best ability, you must allow great liberty of action among your residents.”14 Two more books came directly from her Hull House experiences: The Long Road of Woman's Memory, a book on what she learned from her women neighbors was published in 1916 and The Second Twenty Years at Hull-House, which was published in 1929.15

Another significant and controversial area of Jane's life involved her work for peace. In 1899, she spoke on Democracy or Militarism before the Chicago Liberty Meeting, and in 1906, she taught a course on peace ideals at the University of Wisconsin. These ideas were published the next year in Newer Ideals of Peace.

After World War I began, she continued to work for peace through her leadership, writings, and speeches. In 1915, she became chairman of the Women's Peace Party, president of the International Congress of Women, chairman of the International Committee of Women for Permanent Peace,16 and toured European capitals with other peace movement leaders seeking an end to the war by speaking with government officials.

In America she sought unsuccessfully to halt America from entering the war. For her efforts she was expelled from the Daughters of the American Revolution and called “the most dangerous woman in America” by President Theodore Roosevelt, a man she had actively campaigned for in 1912. Jane also angered the pacifists when she worked with the government in 1918 and assisted Herbert Hoover, the Director of the Department of Agriculture, in gathering food and relief for the women and children of the enemy nations.17 She published Peace and Bread in Time of War (1922) concerning this experience.

After the war in 1919, the International Committee of Women for Permanent Peace became the Women's International League for Peace and Freedom (WILPF). Jane was their founding president and remained president for ten years, overseeing six international conferences. In 1929, she became their honorary president for life. Two years later in 1931, she was awarded the Nobel Peace Prize, shared with Nicholas Murray Butler. She was the first American woman to receive this honor.18

At 66 years of age, Jane suffered a heart attack in 1926 and continued to struggle with her health for the next nine years. During this time she published her last book, The Excellent Becomes the Permanent (1932), a collection of current leader's addresses that was an explanation of what she believed and what she felt about the future.19 Three days after an operation which revealed cancer, Jane died on May 21, 1935. For her work for the poor and the oppressed, and for her efforts to establish world peace, Jane was considered the “Mother of the World.”20