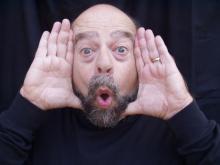 Bernard (Bernie) DeKoven was a “fun theorist” who designed games, taught games, wrote about games, helped people improve their games, and advocated play and fun.1 He was also an author, workshop facilitator, and presenter.

As a young child, Bernie remembered realizing that school could and should be fun. This realization initiated his journey on what he called the “Playful Path.”2 After earning a bachelor’s degree in English, Bernie earned a Master’s degree in Theater from Villanova in 1968, where he received a Rockefeller Fellowship in playwriting.3

Bernie's first job was teaching fifth and sixth grade students, which he taught by playing games, an important part of the Playful Path. However, the reality of preparing for a pivotal scholastic test in sixth grade ended the fun of teaching students by play in that traditional school setting. From there Bernie moved on to an experimental elementary school in Philadelphia, “The Intensive Learning Center,” where he was a Curriculum Development Specialist.

Working in a theater-in-the-round situation in a remodeled factory, Bernie decided they would “reinvent theater,” which meant “the kids taught me their theater. And I played with them. And we called it 'games.'”4 The curriculum that resulted was a five volume Interplay Games Catalog, which included a thousand games coded and organized according to the social dimensions of each game: for example, games played in a team, or played between two teams, or played in couples; active and quiet games, games with leaders or special roles, or games that everybody played for themselves.5 Bernie began to teach the curriculum to teachers and to research further on games and play.

The DeKoven family moved to rural Northeastern Pennsylvania and established The Games Preserve, a retreat center for the study of play. Instead of cows, Bernie's barn was full of all kinds of games, and it was here that he “played with, explored, studied, discussed, game after game after game.”6 Others joined him for this exploration, including students from the University of Pennsylvania studying with Dr. Brian Sutton-Smith.

At the 1976 Bicentennial celebration in Philadelphia, Bernie helped 250,000 people play games.7 This led to being asked to co-chair the New Games Foundation and lead them in building a worldwide training program for the New Games events. The New Games Foundation was an organization that hosted free community play events in parks where everyone was encouraged to “Play Hard. Play Fair. Nobody Hurt.” Drawing on his experience with the Games Preserve, Bernie worked with John O'Connell and Burton Naiditch to train scores of leaders, who guided hundreds of play sessions, which affected tens of thousands of people in several countries.8

Bernie later fondly called the cooperative games played at these events “pointless games” because “the score doesn't matter and the only reason to play is for the fun of it.”9 The New Games Book, published by the Foundation in 1976, was a collection of these games. Three years later and many trainings later, Bernie left the Foundation to work as Senior Game Designer at Ideal Toy Company.

After publishing The Well-Played Game and before revising it, Bernie worked as a computer game designer for Automated Simulations where he stated he could try out his understanding of the Playful Path in a “virtually virgin computer jungle.”10 While there, he designed the games Ricochet (1982) and Alien Garden (1982). At that time, he also accurately predicted the future of computer gaming: the use of motion control, app store distribution systems, and the availability of games through networks. 24 Jan. 2012." href="#footnote11_idj9imt">11 Later he coined an industry term “coworking” to describe computer supported collaborative work.

Some of these computer games were Light Waves, Fleet Feet, and Timebound produced in 1984 by Children's Computer Workshop and later by CBS software.

With the revised The Well-Played Game in bookstores, in 2002 Bernie was invited to be an adjunct faculty of the Multimedia Division of the University of Southern California School of Cinema-Television.

Once again he taught the principles of New Games and assisted in the New Games festival in Redondo Beach, California in 2002. Often New Games Activities involved using six foot in diameter balls. Expanding on this, in 2009 Bernie coauthored with Todd Strong, Great Games for Big Activity Balls.

Bernie continued to conduct play workshops at the Esalen Institute in Big Sur, California, and to present his understanding of games at universities and conferences around the world. Concerning these workshops, play industry Jay Beckwith commented that, “We all needed to believe that the world is still a place where we can play... I continue to work through many of the ideas that you introduced and reintroduced to me.”12

Junkyard Sports, Bernie's second popular press book, which was published in 2004, is about how traditional sports can be adapted to be “played wherever the players happen to be, with whomever happens to be there” and often with whatever equipment can be found. Four years later, he co-developed a computer business simulation entitled Junkyard Games.

Online since 1981, Bernie had three websites to “help people from all over the world reclaim their playfulness”: DeepFun with Bernie DeKoven, Majorfun, where he awarded games that were especially conducive to creative and family play, and Junkyard Sports.13 (Major Fun is now administered by Will Bain.) He also spread the importance of play for adults and children alike through keynote addresses at such gatherings as the North American Simulation and Gaming Association (NASAGA) 2010 Conference and the Think Design Play, 5th DiGRA Conference in 2011.14

For his “outstanding achievements in the field of fun,” Bernie was awarded the 2006 Iffni-Raynolds award from the North American Simulation and Gaming Association. He was also a lifetime member of The Association for the Study of Play.15

Bernie wrote A Playful Path that was published in 2014 by Carnegie Mellon University ETC press. The book “serves as a collection of ideas and tools to help us bring our playfulness back into the open.”16 Bernie also wrote a blog using the same name as his book, A Playful Path, which was inspired by the quote: “A playful path is the shortest road to happiness.” ­‐ the Oaqui.17