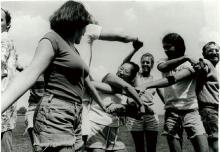 The New Games Foundation was an organization that hosted free community play events in parks where everyone was encouraged to “Play Hard. Play Fair. Nobody Hurt.” They believed that physical play was vital for everyone, that no one should be left out of the activity, that little or no equipment is required, and that the rules of play should be “dirt simple and fun.” While they believed that competition and cooperation should co-exist, winning or losing was not important. Rather, the process of play was emphasized as games were readily adapted or changed to fit the circumstances.1

In 1966, Stewart Brand, the author of The Whole Earth Catalog, was asked to create a public activity to protest the Vietnam War. He created Slaughter, a physically intense game with 40 players, four moving balls, and two moving baskets on a large wrestling mat. Anyone jarred off the mat was eliminated from this energetic game.

The second game he created for this event was a battle to control Mother Earth which involved hundreds of people, a six feet diameter canvas “Earth Ball,” and these instructions: “There are two kinds of people in the world: those who want to push the Earth over the row of flags at that end of the field, and those who want to push it over the fence at the other end. Go to it.”2

The interesting phenomenon that always occurred was that when the ball neared one end or the other of the field, people would switch sides to prevent the “goal.” The popularity of these games birthed the New Games Movement.

Stewart was soon joined by George Leonard who brought an Eastern philosophy of cooperation to the movement.3 When Pat Farrington, a community organizer, joined the Foundation, the movement’s focus became hosting New Games Tournaments, the first of which was held in October 1973 at the Gerbode Preserve near San Francisco, California.4

Funded by the Point Foundation, this tournament brought 6,000 people together for inclusive games of cooperation and trust. A classic was the Lap Game where a circle of human chairs was formed in which one person sat on the lap behind him while being the chair for the one in front of him.

With the success of the first Tournament, the New Games Foundation was formed to host subsequent second, third, and fourth New Games Tournaments, each drawing thousands of willing participants. Ray Murray, who was affiliated with the San Francisco parks, assisted hosting the events in open air venues.

Besides hosting tournaments, the Foundation published The New Games Book in 1976, which included a history of the movement and Foundation, a section on how to host a New Games Tournament, articles by the movement leaders, and instructions for dozens of highly intense, physical, and competitive games.5

In the mid-1970s Bernie DeKoven, a game designer and play facilitator was asked to co-chair the Foundation with John O'Connell and Burton Naiditch. He was asked to help move the Foundation and movement to the “next phase – building a training program that would allow them to teach people around the world how they, too, could produce their own New Games events.”6 Drawing on Bernie's experience in teaching play facilitation at the Game Preserve, they developed the New Games Training program which led to hundreds of events around the world and thus influenced tens of thousands of people. Bernie left the New Games Foundation in 1979.

The Foundation’s second book, More New Games, was published in 1981 and featured movement editorials and instructions for games that emphasized cooperation and “feel-good activities.” The 1980s saw the Foundation flounder due to the increasingly litigious atmosphere that had begun to affect most public events. The New Games Foundation closed in 1990.7

The New Games movement has continued through its legacy of games that are still played in elementary schools and youth organizations around the world. John O'Connell, Bill Michaelis, Bernie DeKoven, and Dale LeFevre, all of whom were key figures in the Foundation, are continuing to convey the spirit of New Games with their presentations and classes. John and Bill conduct an annual September New Games Activities held in Pacifica, California.8 Dale conducts workshops and trainings in England.9

As a result of the extensive citing of Bernie’s Well-Played Game in Eric Zimmerman and Katie Salen’s book Rules of Play,10 Bernie has been bringing New Games to designers of computer games, leading, most recently, to the republication of The Well-Played Game, 35 years after its initial appearance.11