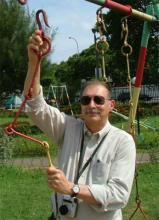 Monty Christiansen began his career in safety when he was in the 6th grade. As a member of the AAA School Safety Patrol, he monitored other children crossing streets both before and after school. As a young man, he attended Iowa State University where he earned a Bachelor of Science Degree in Landscape Architecture in 1964. During that time, he was inducted into Tau Sigma Delta, the National Professional Architecture Honorary Society, at Iowa State in 1963. The following year he received the Certificate of Merit from the Iowa State American Society of Landscape Architects.

After graduating, Monty became a park planner for the St. Louis County Department of Parks & Recreation, where he designed playgrounds for two years. From Missouri, Monty moved to East Lansing, Michigan, and became an Assistant Professor of Landscape Architecture at Michigan State University in 1968. While there, he worked as a landscape architect for Philip Flores and Associates.

Recognition for Monty's excellence in teaching began in 1977, when he received the Christian R. & Mary F. Lindback Award for Distinguished Teaching. In 1981, the Recreation and Parks Student Society of Penn State University also honored Monty with the Faculty Recognition Award for Quality Instruction.

As Monty says, “Professors must publish, so I wrote four books and nearly a hundred articles.”1 The first of these books was the Park Planning Handbook – Fundamentals of Physical Planning for Parks and Recreation Areas, which was published in 1977.2 This book has become a standard text for future generations.

It was during the 1980s that Monty wrote and published another book and a correspondence course. The book, Vandalism Control Management for Parks and Recreation Areas, was published in 1983, and the course, Functional Planning and Evaluation of Park Support Systems, was published a year later.3 For this later work, he was awarded the 1985 Distinguished Author of Independent Study Course from the National University Continuing Education Association.

Along with his writing and photography, Monty has a long history of leadership as an active member of numerous professional associations. He was a member of the American Society of Landscape Architects as well as ASTM International (ASTM) for most of his professional career. In  ASTM he served on the Writing Committee that established the U.S. Standard for Public Playgrounds. He also served on Committees for Public Playground Equipment, Playground Surfacing, Soft Contained Play Equipment, Play Spaces for Children Under the Age of Two, and sub-committees on Amusements and Attractions.

He was also a leader in the National Society for Park Resources (NSPR). By 1976 he was on the NSPR Board of Directors, and over the next 22 years he served on this board six different times for a total of 12 years of leadership. Additionally, during 1994-1996 Monty was President of the NSPR.

Another of these professional associations, Pennsylvania Recreation and Park Society (PRPS), recognized Monty's contributions with a Presidential Citation given to him in 1982. He later served as President of the PRPS during 1985-1987 and received another Presidential Citation in 1985. Three years later, Monty was honored with their Fred M. Coombs Award for Distinguished Service to the Profession. In 1994, Monty was invited to join and was inducted into the American Academy for Park and Recreation Administration, where he was recognized for his excellence in teaching, writing, and leadership in the playground industry.

In 1988, Monty became the NRPA's Representative to the ASTM International Playground Safety Standards Committee. He served in this capacity for 13 years, and in 1990 Monty was the recipient of two awards from NRPA:  the National Distinguished Professional Award and the Special Citation for Leadership and Service.

Continuing his concerted efforts toward playground safety, Monty, along with Dr. Fran Wallach and Ken Kutska, founded the National Playground Safety Institute in 1989. He served on the Board of Directors of NPSI from its founding until his retirement in 2001 and was given the NPSI First Distinguished Fellow Award for Outstanding Contributions to Playground Safety Movement.

Part of this recognition came from Monty's further writings, which included Play it Safe – An Anthology of Playground Safety that was published in 1992 and Points about Playgrounds – A Compilation of Significant Information that was published in 1993. He also edited the proceedings of the two international conferences on playground safety which he had hosted. The first publication, Proceedings – Playground Safety An International Conference, received the 1995 Creative Programming Award from the National University Continuing Education Association. The second international conference's proceedings were also edited and published by Monty in 1999.4 In addition to all his other writing, he also was a regular contributor to Playground Magazine.

In association with NPSI, Monty was a Certified Playground Safety Inspector (CPSI) and Instructor of their Certification Course until his retirement in 2001. After his retirement he founded the International Playground Safety Institute, LLC. It was natural for Monty to take the NPSI mission international after years of circling the globe for speeches and consulting. He has been to Scotland, Argentina, Japan, Australia, New Zealand, Taiwan, Hong Kong, Singapore, Canada, Jamaica, Turks & Caicos, Finland, England, and Germany to teach about park planning, playground safety, vandalism control, and aquatic facility development.

Because of his international connections, it was no surprise for Monty to head the NRPA Technical Advisory Team sent to Sri Lanka after the 2003 tsunami. Monty, along with nationally recognized playground industry leaders Curtis Stoddard, Ken Kutska, and Tom Norquist, traveled to Sri Lanka. The Tsunami Relief Fund, which was headed by former presidents Bush and Clinton, donated $1 million to help fund the construction of the playgrounds. Monty, after seeing photos of the devastated regions said, “These playgrounds were pretty well wiped out by the Tsunami, and so we’ve seen litter and debris that the children are still trying to play on.”5 After they arrived, they met with local construction and building companies, and with their help organized and built 87 new playgrounds for the children. Monty believes that this experience was his most significant contribution oversees.

Monty has received numerous accolades and awards for his many years of dedicated work in the playground industry. Yet he always thought that his “work is just child’s play” and now, in his retirement maybe he will have time to “play.”