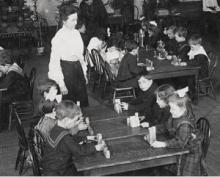 Kindergarten is a classroom program typically for children from 4 to 6 years of age. It is designed to be a transition for young children from home into the traditional school environment. Serving as a training ground for social and academic skills, children learn how to interact with others and become familiar with school. Through teacher-directed instruction, small group work, purposeful play, and social interaction with peers, children are helped to develop basic academic skills.1

Recognizing the important learning that results from children’s play, traditional kindergartens were play-focused. It was believed that children should explore, discover, and experience the joys of learning through play, which is vital for their natural development and success later in school. In the classroom, children were taught to write, color within the lines, paint, and cut with scissors. At recess, children learned how to make friends, solve problems, and respect others, developing self-regulation, patience, and self-confidence.2

Friedrich Froebel is credited with establishing the first kindergarten program in Germany in 1837. His program for the education of young children was called kindergarten, which literally means children’s garden. He saw his philosophy to nurture and protect children as being compared to how plants are nurtured and sheltered in a garden.

Froebel promoted that learning must start with the concrete and move to the more abstract, and that perceptual development preceded abstract thinking skills. He developed manipulative playthings he called Gifts to facilitate the sensory aspects of learning. These included balls of yarn, wooden blocks, geometric shapes, and natural objects. His kindergarten also included activities he called occupations, which included handwork such as molding, folding, beading, threading, and embroidery. Singing, games, and stories were also an important part of his curriculum.3

Froebel believed that women were best-suited to nurture children, and he opened a training school just for women to study to teach kindergarten. For his unorthodox ideas, Froebel’s kindergartens were banned in Germany from 1851 to 1860 by the Prussian government, however, the kindergarten program spread to other countries including the United States.4

Kindergarten in the United States

Peabody attended the Kindergarten Seminary, where she worked with one of Germany’s top kindergarten trainers, Baroness von Marenholtz-Bulow, who helped her further the establishment of the kindergarten in the United States along with instituting training for kindergarten teachers there. This began the kindergarten movement and its growth in America.

Susan Blow is credited for her influence in creating the first public school kindergarten in St. Louis, Missouri in 1873.  During a family grand tour of Europe, Susan had become familiar with the Froebel kindergartens that had spread throughout western Europe, and she returned home with the desire to establish a kindergarten in her hometown. Although her father was willing to set up a kindergarten as a private school for her, Susan felt it her mission to promote kindergartens in public schools. She worked with William Torrey Harris, the St. Louis superintendent of schools as well as the U.S commissioner of education, who gave her his full support. Susan went to New York for a year to study Froebel’s methods with Maria Kraus-Boelte, who had studied with Froebel’s widow. Upon her return she opened the first public school kindergarten, which quickly expanded to the other schools throughout the city. She promoted her work at the U.S. Centennial Commission in 1876 with an exhibit that received an award for excellence for her kindergarten within the public school.5

Blow insisted on following the kindergarten program as Froebel had created it. However, by the 1900s, the kindergarten movement had become very progressive. Kindergartens became more established throughout the country, and by 1914 every major city in the United States had implemented kindergartens in the public school systems.

With the rise in popularity, teachers needed to teach double sessions and could no longer interact with the students and families as before. New subject areas were introduced and the social development of the Froebelian kindergarten philosophy was left behind. Patty Smith Hill felt that Froebel’s rules were too rigid, and she developed her own program for the new American kindergarten. With the rise of the child study movement, research in childhood education began to study teachers’ efforts, and the kindergarten curriculum moved toward standardization and efficiency.

By the mid-1950s an acceleration of academic skills was included to prepare children for later academic success. To better prepare children of lower socioeconomic backgrounds, kindergartens were promoted as an attempt to remedy American poverty.6 By 1965 between 50% and 85% of five-year-olds attended kindergarten, mostly in public schools that were provided by state funds in over forty states. The Head Start program began in 1965 and helped further the idea of early childhood education. By the 1980s between 82% and 95% of five-year-olds in America attended kindergarten.7

As kindergartens became more academic-focused, complex curriculum standards were set, many of which had originally been first grade standards. With many households using preschool as their choice of childcare, children were exposed to skills they typically would have learned in kindergarten. Along with the push to prepare children for standardized testing in later grades, kindergartens are now teaching the first grade reading curriculum.8 Playtime has been replaced with worksheets and teacher instruction, and the typical school day for kindergarten students has four to six times as much time in literacy and math instruction and taking tests as in free play.

Long-term research casts doubt on the assumption that early teaching of phonics and other academic skills leads to better results. In fact, children in play-based kindergartens have been shown to be equally good or better at reading and other intellectual skills over children who were denied play when tested at age ten.9