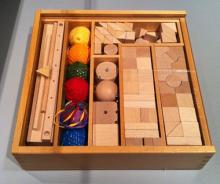 Friedrich Froebel was a German educator in the early 1800s who is considered the founder of the kindergarten movement. He developed a series of play materials he called Gifts that included geometric building blocks designed to teach children about forms and their relationships in nature. They were so named to emphasize to the children that the playthings should be properly respected as gifts and to the teachers to recognize the individual “gifts” each child possessed from birth.1

Froebel believed that the education of the child should begin shortly after birth. With much thought and observation, he developed his system of learning with the Gifts he designed to function as tools with which to awaken and develop a child’s recognition of common elements found in nature through inanimate things. His Gifts progressed from the simple to the complex, and the handling of the objects at a very young age gave children an innate sense of cause-and-effect while still beyond their comprehension.2 Froebel was influenced by Johann Heinrich Pestalozzi’s ideas that asserted children need to learn through their senses and through physical activity. He argued for “things before words, concrete before abstract.”3

Froebel numbered the Gifts to simplify referring to them in his writings, which described the first six Gifts. More Gifts were developed in his later kindergarten work. Gifts are distinguished from other play materials in the kindergarten: they are able to be returned to their original form when play is finished. Froebel proposed two rules for Gift play: (1) all parts of the particular Gift must be incorporated in the play, and (2) a creation is always changed through modification, not destroyed and rebuilt, allowing unity to be maintained and subtle lessons about the nature of change learned.4

Of the ten Froebel Gifts, the first six Gifts involve solids; Gift 7, surfaces; Gift 8, lines; Gift 9, rings, and Gift 10 points. Froebel also developed another set of activities that he called “occupations.” The occupations were designed to furnish material for practice in certain skills with clay, wood carving, paper folding, drawing, weaving, stringing beads, and other materials.5 The Gifts would lead to discovery; the occupations to invention. The Gifts would give insight; the occupations would give power.6

What are Froebel's Gifts?

Froebel’s Gifts were designed to meet the cognitive and developmental needs of children. His writings gave specific suggestions for using each Gift to develop the desired effects with the appreciation of their relationships to forms of life (relating to objects found in a child’s life/world), forms of knowledge (math/science), and forms of beauty (abstract patterns and designs).

The earliest toy for infants, Froebel’s soft yarn balls included six balls: three primary colors of red, yellow, and blue; and three secondary colors of orange, green, and purple. They were easy to grasp and helped the child to distinguish form, color, and movement, the qualities of matter in the physical universe.7

This device contained a wooden ball, a wooden cube, and a wooden cylinder, which were suspended by strings. When spun, the individual shapes demonstrated the principle of unity by discovering that the spinning of one shape shows the shape of another – a spinning cube produces a cylinder and a spinning cylinder produces a sphere – revealing their interconnectedness.8

This set of blocks contains a two-inch cube made up of eight one-inch cubes. The purpose of these blocks was to introduce the concept of parts making up a whole. Mathematical concepts of addition, subtraction, multiplication, and division can be introduced. Froebel strongly believed in the value of symbolic play and allowing the child to use his imagination to play with the cubes.9

With only a slight variation from Gift 3, eight rectangular blocks opened up many more possibilities for constructive play. The blocks have a proportion of 1 to 2 to 4 (1/2” by 1” by 2”). The mathematical concept of fractions can be discovered with the pieces.10

This Gift consists of a three-inch cube made up of 21 one-inch cubes, 6 half-cubes, and 12 quarter-cubes. Best used with children five years or older, this Gift introduces triangles and allows for more realistic buildings and structures during constructive play.11

This three-inch cube is made up of 18 rectangular blocks, 12 flat square blocks, and 6 narrow columns. Concepts of scale, proportion, symmetry, and balance can be discovered with this set of blocks.12

Geometric shapes made from wood, plastic, or paper, this Gift contains seven shapes – square (1” and 2”); equilateral triangle (1” and 2”); right-angled isosceles triangle (1” and 2”); right-angled scalene triangle; obtuse isosceles triangle; circle (2”); and half circle (2”). Each shape comes in a pair of complementary colors. These shapes are derived from the surfaces of the earlier Gifts. Moving from understanding surface as part of the solids, now the concept of surface or plane as a separate object is introduced. From working with solids to objects in a two-dimensional form, the child begins to shift from concrete to abstract comprehension.13

This Gift moves from the concept of surface to the concept of line, representing the edges or outlines of earlier objects. The set usually contains some or all of the following pieces: 1”, 2”, 3”, 4” and 5” sticks and 1”, 1.5” and 2” diameter rings, plus 1”, 1.5” and 2” diameter half rings. These sticks and rings encourage children to lay down patterns.14

This Gift features small objects in a variety of colors to represent the point. Through the progression of the Gifts, the abstract quality of a point, which has no dimension, is explored. Abstract concepts cannot be taught, but can be discovered through play and internalized. Using a paper grid with the points helps draw the connection between points and lines.15

Using points and lines to make three-dimensional solids is accomplished with this Gift. Originally dried peas were soaked until they were soft enough for toothpicks to be used to connect the structures, known as peas work. Today’s architectural toys such as Tinkertoys and Erector sets can accomplish the same goals as Gift 10.16

In his book outlining the use of his Gifts, Education by Development, Froebel also laid the foundation for using curvilinear solids with children. This Gift forms a cylinder with concentric rings divided into 36 pieces with halves, thirds, and quarter pieces. This Gift is especially suited for architectural constructions.17

Froebel’s system of play and learning proved to successfully connect children with nature through the observed patterns discovered. Highly acclaimed architect Frank Lloyd Wright accredited his early learning with Froebel’s Gifts in kindergarten as awakening his mind to the rhythmic structure in nature. “I soon became susceptible to constructive pattern evolving in everything I saw. I learned to ‘see’ this way and when I did, I did not care to draw casual incidentals of Nature. I wanted to design.”18

Milton Bradley was the first major toy maker to produce the Gifts in the United States. With the spread of the kindergarten movement, more toys were marketed for their educational content and their potential for creative expression.19