Play: How It Shapes the Brain, Opens the Imagination, and Invigorates the Soul 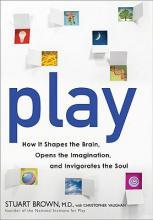 Play: How It Shapes the Brain, Opens the Imagination, and Invigorates the Soul was written by Stuart Brown, M.D., founder of the National Institute for Play, along with Christopher Vaughan, an experienced journalist and author. Published in 2009, this book describes the significance of play in the lives of animals and humans and how free play develops the social and locomotive skills in children that are necessary for creative thinking later in life. He used his observations of animals in play as well as the latest advances in neuroscience, biology, social science, and psychology to explain the role of play in brain development and social integration.

Dr. Brown has conducted over 6,000 interviews with people from all walks of life, including Nobel Prize winners, CEOs, and serial murderers, to obtain their “play histories.” Evaluating these accounts has led to many interesting findings about the importance of play in people’s lives and the effects of play deprivation.

The book has been divided into two parts. Part One, Why Play? establishes the necessity of play and attempts to define it. Chapter One, The Promise of Play, suggests that “the ability of play is critical not only to being happy, but also to sustaining social relationships and being a creative, innovative person.” Using the example of replacing retiring engineers from an aerospace research facility with top graduates from top engineering schools who didn’t perform as well as the earlier employees showed that when the problem was analyzed, the resulting difference was in how the two sets of engineers had played as children. Those who had engaged in constructive play, building and taking things apart, were able to problem solve better than those who had not.

Chapter Two, What Is Play, And Why Do We Do It? acknowledges the difficulties in defining play. The book describes the properties of play as: apparently purposeless, voluntary, inherent attraction, freedom from time, diminished consciousness of self, improvisational potential, and continuation desire. With many studies done on animals and play, these observations relate to children and play as well. “Play lets animals learn about their environment and the rules of engagement with friend and foe.” It is suggested that play is so important to development and survival that “the impulse to play has become a biological drive” and that lack of play can cause a play deficit.

Chapter Three, We Are Built for Play, examines the effect of play on brain development including new neural connections as well as learning and social interaction benefits. Eight play personality types are described: the joker, the kinesthete, the explorer, the competitor, the director, the collector, the artist/creator, and the storyteller.

Part Two, Living the Playful Life, starts off with Chapter Four, Parenthood Is Child’s Play. The types of play as children grow and develop are described, such as attunement, body and movement play, object play, imaginative play, social play, friendship and belonging, rough and tumble play, celebratory and ritual play, storytelling and narrative play, and transformative-integrative and creative play. The lack of play discovered in the life of serial killer Charles Whitman is explored in this chapter.

Chapter Five, The Opposite of Play Is Not Work, suggests that it is really depression. The book argues that play is actually an essential element for workplace situations. It plays a role in encouraging creativity, innovation, and mastery. The need to enjoy work is examined in this chapter.

Chapter Six, Playing Together, explores ways to encourage adults to add play into their lives in several areas. Suggesting that play is at the foundation of all personal relationships, the chapter discusses the role it plays in romantic relationships.

Chapter Seven, Does Play Have a Dark Side? explores whether play can have a destructive or mean element. Teasing, rough and tumble play, and addictive play behaviors can have harmful results.

The final chapter, Chapter Eight, A World at Play, suggests that play sets the stage for cooperative socialization, nourishing the roots of trust, empathy, caring, and sharing. Free play, games, and sports set the foundation for understanding fairness and justice. The book ends with seven specific suggestions to help people bring play into their lives.1