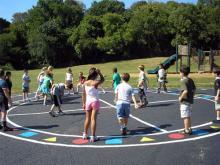 Peaceful Playgrounds started in 1995 with Dr. Melinda Bossenmeyer, Ed.D., the principal of E. Hale Curran Elementary School, who wanted more children involved with physical activity during recesses. Melinda designed a program using a variety of games in organized activities rather than the passive standing in line to use playground equipment or talking in small groups that she was seeing. With her new program she saw a reduction of conflicts, an increase in children participating, and a better use of the open playground areas, which reduced overcrowding and injuries.1

Using her 27 years as an educator including her 18 years as a physical education teacher, Melinda created the Peaceful Playgrounds Program as a low cost way for other schools to manage their playgrounds. By utilizing games, such as hopscotch, bean bag toss, four square, the newer alphabet toss, multi-use circle, and prisoner court, children that were actively involved during recess jumped from 7-15% to 90-95%. Additionally, over the three years of using the Peaceful Playgrounds Program, a study at Melinda's school, in Murrieta, California, found reported injuries decreased by 83%.2

The following year Melinda refined the program into the Peaceful Playground Program Kit, which included grouped stencils, blueprints, activity guides, playground reports, playground injury reporting forms, and an overview of the program on the video. This kit also included a conflict resolution program of three parts:  Walk, Talk, or Rock. In this program the children are taught to walk away, talk it out, or resolve issues with the Rock-Paper-Scissors game.3

With continued growth Melinda moved Peaceful Playgrounds from Canyon Lake, California, to Los Angeles in 2003. She also started publishing their free monthly newsletter “Play Nice,” which is a resource on managing playgrounds. With tips on handling bullying, childhood obesity, new activity ideas, and playground supervision, it also includes current research concerning playgrounds and physical movement, and aids in planning PE curriculums and securing grants. Currently there are 10,000 readers of “Play Nice” with an index and archive available online.4

Also in 2003, Peaceful Playgrounds received the Golden Bell Award for Excellence in Education School Safety from the California School Boards Association. The following year, after incorporating and becoming Peaceful Playgrounds, Inc., they extended their sphere of influence to include public parks and preschools. In doing so they were honored with the Friend of Recreation Award by the American Association for Leisure and Recreation.

That same year Peaceful Playgrounds, Inc. was awarded the 2005 Best in Class Award from Action for Healthy Kids Association.

In March of 2008, Peaceful Playgrounds, Inc. moved their offices to Lake Elsinore, California, where a larger facility has allowed them to expand into the home market with retail mats and games.

Over the last 15 years, Peaceful Playgrounds, Inc. has grown from 1 school to 8000 schools, which involve more than 4 million children. They offer three main programs:  the Recess Program Kit, the Physical Education Program called Fundamental Movement, and the We Count Walking Program. The Recess Program Kit includes an updated Peaceful Playgrounds Program Kit as well as the Companion Equipment Pack, Striping Machine and Paint, the Instructional Games DVD set, and a Webinar.

To combat the growing stress to academically achieve, Peaceful Playgrounds, Inc. has launched a Right to Recess Campaign and offers a kit for teachers and parents to educate the communities of the need for children to play and learn through play. Melinda has chaired the Council on Play for the American Alliance for Health, Physical Education, Recreation and Dance and draws on that expertise for Peaceful Playgrounds, Inc.'s campaign to retain recesses, which are properly organized and managed.

She has also been a member of the State Superintendent of Schools Jack O'Connell's California Task Force on Childhood Obesity, Diabetes, and Cardiovascular Disease. This has fueled their focus on eliminating childhood obesity through outdoor active play. Peaceful Playgrounds, Inc. is a Head Start Body Start vendor, and Dr. Bossenmeyer serves on the Head Start Body Start National Center for Physical Development and Outdoor Play Advisory Board.

Peaceful Playgrounds, Inc. started with and has maintained a simple mission and philosophy. As Melinda states it, “I had a simple goal that was to get more children involved in physical activity rather than waiting in line for their turn or just standing around talking. Children who burn off energy, not only reduce their risk for obesity, but they increase their focus on education when returning to class.”6