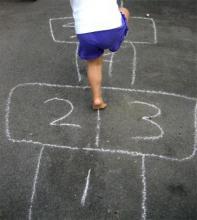 The children’s game of hopscotch has been a popular playground activity for years. With the basic idea of not treading on lines, variations of the game are played around the world. The English name refers to hopping over the “scotch,” which is a line or scratch in the ground. Lines are drawn in a variety of patterns of squares for the children to hop in with a particular order determined.1

The known history of hopscotch dates back to Roman times, although some believe that the Chinese created the game. Early Roman soldiers, dressed in full battle armor, were trained to hop up and down a 100 foot-long series of squares that had been scratched into the ground to improve their strength and agility. When the Roman armies took this exercise to the British Isles, children devised their own games of hopping in squares.2 The earliest recorded reference to the game of hopscotch was in Poor Robin’s Almanac in 1677, where the game was called scotch hoppers.3

Hopscotch is played on a hopscotch pattern drawn on the ground in the dirt, with chalk on pavement, or with masking tape on an indoor floor. The pattern is often a series of squares that are numbered with several single squares in a row and then two squares next to each other, followed by a single square, and so on. The squares are hopped in with one foot and the two squares side by side are hopped in with both feet at the same time. There are many variations of patterns and some are single lines of squares that circle like a snail into a center square.4

To play hopscotch, each player must have a marker to toss onto the hopscotch pattern. Markers can be stones, pennies, bean bags, or other items. The most common games have the first player toss his marker into the first square without touching a line or bouncing out. If the marker lands in the wrong square, the player loses his turn. With the marker in the proper square, the player then hops over the square with the marker and proceeds through the course without touching any lines, missing any squares, or losing his balance. When the player reaches the end of the court, he turns around and hops back in reverse order picking up his marker when he reaches that square. If successful, his turn continues and he attempts to toss his marker in the next numbered square and repeats the course. The first player to complete the entire numbered course wins.5

Some variations of the game allow for designated rest squares, sometimes called “Rest,” “Safe,” or “Home.” These squares allow the player to put both feet down to rest before continuing. Some rules also allow players to put their initials in squares of their choice as they play the game. Squares with their own initials are their rest areas, but other players must hop over them. The game becomes more challenging as multiple squares have initials in them.6

Children benefit from playing hopscotch and other games with rules in many ways. They learn to follow instructions, wait their turn, and important social skills involved in playing fair and being a good winner or loser. Hopscotch can be a game of short duration during recess on the playground or can be played for longer periods of time as the children become more physically skilled in negotiating the squares. Children’s motor skills, balance, and agility are developed as they play hopscotch.